64 Flamingos and an Imaginary Dog

A Meditation on Two Earthquakes 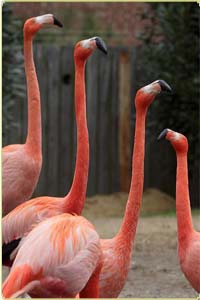 Many readers no doubt felt the shifting of the earth beneath Roxie's World that occurred the other day. The animals at the National Zoo in Washington certainly felt it. The Zoo's Center for Animal Care Sciences released a fascinatingly detailed report on changes in animal behavior that staffers noted just before and during the 5.8 magnitude quake that shook the region on Tuesday afternoon: apes abandoning their food and climbing to the tops of tree-like structures, vocalizing in ways that indicated irritation; snakes (normally inactive during the day) writhing; a pride of lions standing still and facing a building; 64 flamingos rushing around just before the quake and grouping themselves together, staying huddled until the trembling stopped. 64 flamingos: I love that odd bit of numerical precision, don't you? Do flamingos always hang out in square numbers? (Flamingo photo via.)

Wa Po's Joel Achenbach has a good followup on the Zoo's report that explores the question of what it is that animals seem to know in advance of events such as earthquakes and how they know it. Shorter version: Scientists aren't sure, but possible explanations include an ability to hear, feel, or smell things humans can't detect or, more simply, that animals are paying closer attention to the natural world than humans are. Lacking smartphones and large-screen TVs, perhaps apes and flamingos have more room in their smaller brains to notice that the planet is gearing up to rearrange itself. Just a thought.

We don't have especially gripping tales to tell of the Day the Earth Moved, alas. Ms. Ruby, the new embodied dog of Roxie's World, was home alone at the time, so the Moms can't say whether she exhibited signs of preternatural knowledge of what was about to happen or put up a blood-curdling howl when the house began to pitch. (The house doesn't seem to have pitched much. Aside from a few crooked pictures [see photo at left] and a couple of crawl-space doors popped open, there's little evidence of seismic activity or stress.) Moose was in the car when the quake occurred and felt nothing, though she "heard" it by way of "The Kojo Nnamdi Show," which she was listening to on her way to the office. Goose was having lunch at a restaurant on the campus of QTU, which was thoroughly shaken by the quake. (The university's main library, McKeldin, remains closed today, while structural engineers check for damage and workers re-shelve more than 13,000 books that fell to the floor during the episode. Check out these photos of the mess -- and then go find a librarian to hug, OK?)

Funny thing, though, and this will take us to the imaginary dog referred to in the title to this post: Both moms, in the excitement of the day's events and independently of one another, thought back to an itty-bitty earthquake that rattled the Washington area not too long ago. They both remembered it, though they were fuzzy on when it happened. "Summer," Moose said with confidence, "but I'm not sure if it was 2009 or 2008. I'll have to check the blog. We posted on it." They both told a similar story about how I, then embodied, awoke them by starting to bark moments before the rumbling of the quake began. They told this story, independently and with absolute certainty, before they had seen any of the reports about animals at the Zoo seeming agitated in advance of Tuesday's temblor. I am charmed by this tale, flattering as it is to my animal wisdom and the vital work I performed as guardian of two sweet but largely clueless humans for darn near sixteen years.

The only problem with this happy story, as you might have guessed by now, is that it isn't true. The itty-bitty pre-dawn quake the Moms so vividly recall occurred not in 2009 or 2008 but on July 16, 2010 -- seven months after I had moved on to what we might, for lack of a better term, call Heaven. When Moose finally tracked down our post on the earlier quake, she was astonished to realize how utterly mistaken she and Goose had been in their recollection of the event and by how sincerely they believed something that was demonstrably untrue. Moose had told the story a couple of times that afternoon: "Sure, I remember that other quake. It was summer. Roxie was still with us, and she started to bark just before we felt the tremors." Late Tuesday evening, Goose spoke to her brother, a criminal defense attorney, and they had a good laugh about the unreliability of eyewitness testimony. "People don't necessarily mean to lie," they agreed. "They often just misjudge or misremember what they saw."

That's true, but Moose is still marveling over the imaginary dog that somehow found its way into her and Goose's memories of the Little Quake of 2010 that came before the Not So Little Quake of 2011. Yes, memory is fallible, but our mistakes may be significant. What psychic need was fulfilled by this particular lapse? she wonders. Last summer, we were still grieving the loss of our much loved and fiercely protective companion. Did we insert her into that memory because at the time she was, psychically, still very much with us? Or is this an instance of the present reshaping the past? We have a new dog now who in many ways strongly resembles the old dog. Did Ruby's presence fill in the blanks created by Roxie's absence from the original earthquake? Was our memory lapse really a case of mistaken identity, as in all those times, in the early months of her being with us, when we would slip and say Roxie instead of Ruby? Is the imaginary dog an instance of seeing Ruby where we once would have seen Roxie?

Grief is funny, sometimes. Sometimes literally. Two weeks ago at the beach, members of the extended pack slipped a few times and said Roxie instead of Ruby. "Roxie is dead," Moose declared when one such slip occurred. "That's Ruby." She said it sardonically but with a twinkle in her eye that let kiwiboy know it was OK to giggle. It was her way of saying, Yes, she is really gone, and that breaks our hearts, but we carry on as best we can and find ways to love and reasons to laugh again. This is one of the two lessons Moose sees it as her duty to teach little children. The other is that grownups get to cuss whenever they want to but kids can't. Hey, Miss Jean Brodie she ain't, but you have to admit that resilience and pragmatism are useful life skills.

So, darlings, consider this an invitation to tell us your quake tales or your stories of real or imagined shaggy dogs. Where were you when the earth moved? We're dying to know.
Posted by Roxie Smith Lindemann at 1:59 PM