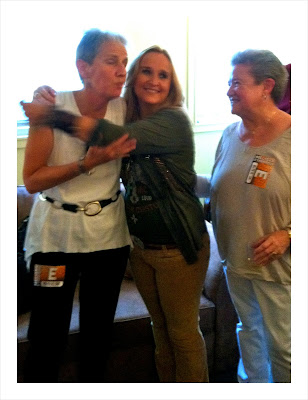 What? You're surprised to see a couple of humble English profs consorting with a Grammy Award-winning mega-dyke? On a Tuesday night? You're shocked to see Moose 2.0 in the arms of a woman with a, um, reputation for getting around with the ladies -- while Goose looks on with a smile? You didn't imagine that Moose's new wardrobe included sexy belts and at least one Peter Pan/Robin Hood/Jane of the Jungle-type tank top?

Well then, darlings, it's possible you don't know the wimmin of Roxie's World quite as well as you thought you did, isn't it?

Here's the scoop, you brave and crazy gals and non-gals: The Moms have the good fortune to be represented in the Maryland House of Delegates by the awesome and openly gay Heather Mizeur, who just happens to be good buddies with Etheridge. (Because, yes, all lesbians know all other lesbians and hang out with them on a regular basis. Which is why Moose has spent the better part of thirty years waiting for Jodie Foster to call, dammit!) The meet-and-greet with Etheridge was a fundraiser for Mizeur. The Moms were happy to contribute, because Heather is the real deal, a politician who truly believes in government of, by, and for the people. We see a great future for her and look forward to being seated in the friends' box when Heather is sworn in (by, uh, Chief Justice Elana Kagan) as the first openly lesbian president of the United States of America. Moose is already trying to decide what to wear.

Anyhoo, dolls. You are probably dying to know what they talked about and what morsels of gossip they picked up among the dyke-erati. The Moms impressed Melissa by recalling that they had seen her at the Bayou in Georgetown way back in the day -- 1988, Etheridge was quick to recall, before she had really broken through to popular success. (The Moms credit one of Goose's very first grad students with bringing Etheridge to their attention -- and getting them down to the Bayou that evening.) A totally unexpected bonus was that Etheridge's new partner, Linda Wallem, was also in attendance last night. Wallem is a TV writer and producer who co-created Showtime's spectacular Edie Falco vehicle Nurse Jackie. Moose did not quite get down on her knees to thank Wallem for designing and developing one of the most extraordinary female characters in the history of series television, but she came close. Wallem, we are pleased to report, is a funny, friendly gal. We wish her and Etheridge many years of attracting and captivating one another.

Oh, and the concert? Fabulous, of course. Etheridge, who turned fifty in May and faced breast cancer seven years ago, still rocks her guts out on stage. We think even Comrade PhysioProf, who usually takes strenuous, visceral, Anglo-Saxon exception to our musical taste, would have enjoyed the show, which was loud and tight and kept the audience on its feet all night. It was a sweaty, satisfying evening, which is more than one can say for a lot of Tuesday nights in Baltimore, n'est-ce pas?

Now, aging rockers, about those captions you are going to write: Hop to, will you? You come up with some pithy lines of dialog, and then we will tell you what Moose was actually saying as the world's most famous lesbian rock star wrapped her bare shoulders in a vise-like grip, while her partner of 27 years looked on with delight. Go on. We know you weren't really planning to work this afternoon. Go on and close your eyes, imagine yourself there last night. You know you want to.

Peace out.
Posted by Roxie Smith Lindemann at 3:01 PM