The Truth Is in the Typo

Brought to you by the American-made blog that once declared, "Close Reading: It's Patriotic."

Look closely, please, at this image of the second paragraph of Dan Balz's story in the print copy of today's WaPo that was tossed on the lawn of Roxie's World this morning: 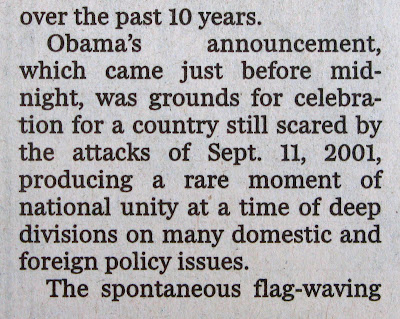 The front-page story, headlined "A moment of national unity at a time of deep divisions," ran underneath a photograph of what the caption termed "revelers" who "descended[ed] upon the White House on Sunday night upon hearing of Osama bin Laden's death" (at the hands of U.S. forces in Pakistan). In the online version of the story in "Today's Paper," the United States is described as "a country still scarred by the attacks of Sept. 11, 2001," not as a country still scared by those attacks, as we see in the above.

My typist had two reactions to this typo as she made her way through the dead-tree edition of the paper and her first cup of coffee this morning. The first was to go all Scathing Online Schoolmarm on the poor Post for the appalling state of its "editing" in the age of No Copy Editor Left in the Joint. She similarly snorted a couple of days ago while skimming one of the eleventy billion stories on the Royal Wedding when she read that William and Katherine will henceforth be known as the Duke and Duchess of Cambridge "at the bequest of Queen Elizabeth II," which, since Her Majesty does not appear to be dead, must be a clever portmanteau formed from request and behest, don't you think? Good grief, Moose howled, Doesn't anybody actually read this stuff before it goes into print? (Incredibly, two days later, the latter error persists in the online version of the wedding story.)

Moose's second reaction to the description of the country as "still scared" by the 9/11 attacks was to think that Balz had accidentally gotten it right the first time and to feel disappointed that the error was corrected in subsequent editions. I mean, really, the proof that we are still a nation half-crazed with fear is all around us. It's the odor you smell, along with stinky feet, in every airport. It's the nagging doubt you feel every time someone intones the phrase, cooked up in the immediate, panic-stricken aftermath of 9/11, homeland security. It's the desperate bravado you glimpsed on the faces of the young people who raced to the White House and other public places to puff out their chests and chant, "USA! USA!" late on a Sunday evening. To many, that was a no doubt discomfiting spectacle, a jarring complement to the president's somber, measured announcement of bin Laden's death, which even the non-Obamaniacs of Roxie's World admired for its lack of triumphalism or any sense of vengeance at long last attained.

You can hardly blame the kids, though, for going a little Ding-Dong! The Witch is Dead upon hearing the news. For most of their lives, Osama bin Laden has been the bogeyman stalking the corridors -- and skies -- of the nation's fevered, fear-addled mind. Whereabouts unknown but capabilities all too well understood, he might have been anywhere, planning to strike again at any moment. And so he was in effect everywhere, controlling, if not our every move, then certainly some of the more regrettable ones -- in Iraq, in Guantanamo, in Afghanistan, in Florida -- over the past decade. You can't blame the kids for wanting to dance upon the grave of the man who brought such fear into their young lives. No. You have to blame the grownups who stoked those fears and used them in pursuit of their own selfish ends.

The tricky thing about a bogeyman, though, is that killing him won't eliminate the fears he set into motion. You don't stand a prayer of overcoming your fears until you admit you have them. And that, my frightened little chickadees, is why you must acknowledge that the truth is in the typo. Put down your flag, take a deep breath, and say it with me:

We live in a country still scared by the attacks of Sept. 11, 2001. And the death of one man, no matter how evil, won't do anything to change that.

Feel better? I sure as hell do. Thank you, and goodnight.
Posted by Roxie Smith Lindemann at 11:13 PM