Regarding a Certain Photograph

Oh, darlings, I know we are very nearly the most unproductive blog on dog's earth these days, but, well, my typist continues to be ridiculously busy with her day job and maniacally dedicated to her Lifestyle Adjustment Plan. (How well is that going? So well that Goose has taken to quipping, "My girlfriend is like the new iPad -- Look at her sideways and she disappears!" She exaggerates, slightly, though it's true someone in Roxie's world will be forced to go on a major-league shopping spree the moment her grades are turned in.)

Anyhoo, I know you are all dying to know what we think about a certain instantly iconic photograph taken in the White House Situation Room last Sunday night while Navy Seals were -- Is there a delicate way to say this? Nah! -- blowing Osama bin Laden's brains out. 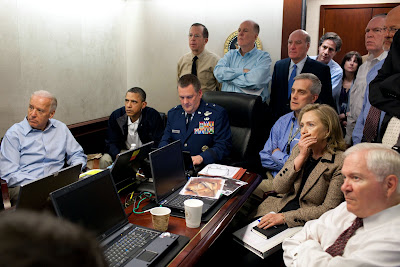 My typist has spent the better part of a week gazing at images and collecting links (thank you, Dog-Eared Book!) and trying frantically to find a photograph that she swears exists of LBJ with his hand over his mouth that she thought it would be fun to compare to Hillary "Oh, gosh, I think I was stifling a sneeze" Clinton's gesture captured for posterity and the amusement of the chattering classes. Moose never found the perhaps nonexistent photo of LBJ, though she thinks the one below, of the president listening intently to a tape sent from Vietnam by his son-in-law Captain Charles Robb, is similarly unusual to the one of Clinton in showing the emotional toll of what a leader is called upon to absorb on a daily basis. The difference, of course, is that we don't see LBJ's face in this photo. Oh, and, you know, that when male leaders show emotion it's proof of their humanity, whereas when women show emotion it's proof that their lady parts make them far too sensitive and unstable to rule the world. 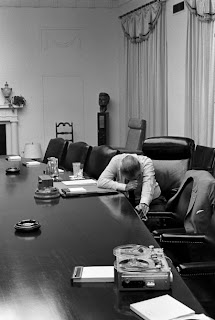 Looking for some serious analysis of the Obama admin photo? Go read Caleb Crain, who finds the image of Clinton's "grandmotherly hand" covering her mouth to be "strangely beautiful" and deeply affecting. Go read Marco Bohr, who does a marvelous job of reading Obama's figure and the weird optics of the photo, which make the commander-in-chief seem remote and slightly out of focus during one of the most important moments of his presidency. Or, if you're tired of staring at that picture, go see what Nick Mirzoeff has to say about Osama bin Laden's TV-watching habits.

What's that you say? Your grades aren't done either? You're far too busy to geek out on optics and yet another one of Hillary Clinton's body parts? I hear ya, kids, and I feel your pain. For you, we've got two more images and a very simple question, which you may answer in comments:

Which of these two photoshopped images of the Sit Room photo made you laugh harder: Superheroes or We Are the World, We Are Poor Princess Beatrice in that Ridiculous Hat?

Discuss, my pretties. Those grades will be waiting for you after you've changed into a dry pair of pants. Peace out. 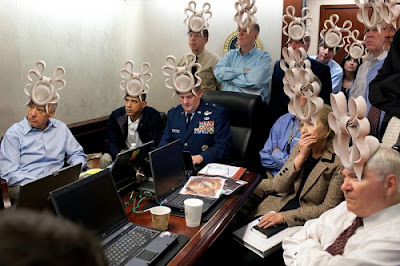 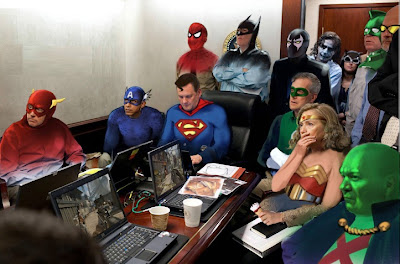