Photo of the Day (Or, Visual Proof that the Lede of the Day Is Fully Justified): 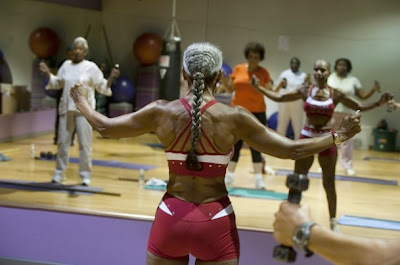 Tomorrow's Wa Po magazine has a cluster of features on women and aging, including DeNeen Brown's profile of Ernestine Shepherd, who was a self-described couch potato into her mid-50s, when she and her late sister Mildred started working out together in response to weight gain. Twenty years later, Shepherd holds the Guinness World Record as the oldest female bodybuilder in the world and tells classes full of huffing and puffing students decades younger than she is that, "Age is nothing but a number." Point taken, girlfriend.

Read the story before you tuck into that vat of Memorial Day potato salad you're planning to devour this weekend. It's mostly feel-good, female-affirmational stuff, but a) what's wrong with that? and b) the story also has the poignant subtext of the relationship between the two sisters. Of the other pieces in the cluster, the commentaries on aging while female by four women of different ages (the youngest being 33) are a little too full of lines like "Groomed eyebrows are an absolute key" to be worth our time, but, hey, wevs, wimmin. Naomi Wolf weighs in with an essay aimed at demolishing the myth that women experience aging as a process of existential loss tied to changes in physical appearance by asserting that she and the women she admires are doing just fine and the men in her social set who bring much younger trophy chicks to dinner parties are looked upon with pity rather than envy these days. 'K, Naomi, thanks for clearing that up for us.

Ernestine Shepherd, we do hereby declare you our Feisty Old Broad of the Holiday Weekend. Thank you for your chiseled abs and your sweaty persistence and your dedication to the dream you shared with your beloved sister. Long may you run -- and lift and squat and sculpt and teach. PAWS UP to you from the hard-working, lifestyle-adjusting middle-aged broads of Roxie's World. 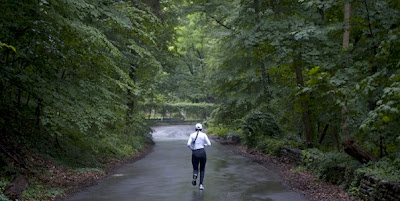 Peace out, darlings. Wherever you go and whatever you do, may the official start of your summer be sun-drenched and pleasure-filled.
Posted by Roxie Smith Lindemann at 2:12 PM