Please don't settle for happiness. It's not good enough, Nobel laureate Toni Morrison said in her remarks to graduates this past Saturday at Rutgers University (graduate alma mater of both the English profs of Roxie's World, btw). “Of course you deserve it," she went on to explain, "but if that’s all you have in mind -- happiness -- I want to suggest to you that personal success devoid of meaningfulness, free of a steady commitment to social justice -- that’s more than a barren life. It’s a trivial one.” 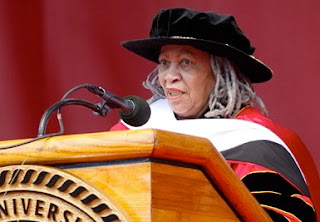 Commencement will finally be held tomorrow at QTU. We have no idea who the speaker is (oh, this guy -- are you fricking kidding me?), but we pass along Morrison's words, so much wiser than the usual graduation folderol, especially for those among our less aged readers who are about to be unleashed upon the world with their undergraduate degrees. Bless you, darlings. Go forth and do good. We are so very sorry that the world awaiting you is such an utter mess and that your prospects for gainful employment in it are so disturbingly remote, but Morrison is right: The journey will go better for you if see it as a pursuit of meaningfulness -- or of integrity or truth, the other alternatives Morrison suggests to Jefferson's emphasis on happiness -- rather than as the pursuit of something as banal and self-centered as happiness. (Morrison's critique of Jefferson's inclusion of the "pursuit of happiness" among the inalienable rights enumerated in the Declaration of Independence begins at 4:28 in the video of her address at Rutgers.) 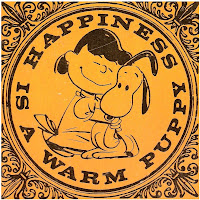 Think about it. Do you think the waves of pro-democracy activism that have swept across the Arab world in recent months were sparked by a desire for happiness? Similarly, do you think the brave Freedom Riders who put their lives on the line fifty years ago this spring to integrate buses and trains deep in the American south did so to support the cause of happiness? (Follow that Freedom Riders link and watch that new PBS doc. It's riveting.)

We are by no means opposed to happiness, and we are pretty sure Toni Morrison isn't either. Still, we've got a hunch that happiness should be a by-product or a consequence of the pursuit of those other, loftier ideals and not the object of the pursuit itself. If you are searching for meaningfulness -- in your work, your relationships, your way of moving through the world -- then we suspect you will end up feeling happy, at least most days, if by happiness you mean feeling satisfied with the general direction of your life and energies. However, if you focus on happiness primarily and lose sight of those larger-than-self aspirations, we worry that you'll wake up some morning twenty or thirty years from now and go, "Geez, man, is this all there is?"

Don't mind us, kids. We're just grouchy old broads who get a little high-minded and tender-hearted this time of year. Here ends the sermon on the speech. We now return to our regularly scheduled grading so that all those Happy Turtles strolling across all those stages over the next couple of days can have their accomplishments certified as legit, official, and diploma-ready. Peace out, and srsly: Congratulations, graduates. Dogspeed to each and every one of you.