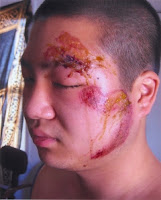 A region rocked by threats of violence. Concern about how police will react if students take to the streets, set fires, destroy property. Will there be more beatings? More dubious arrests?

We're talking Cairo, right, weighing in at last on the small matter of the whole future of Egypt and perhaps the Middle East being at stake? Oh, heck no, kids! We're talking College Park, where it's officially "Beat Duke Week," as the Non-Lady Terps prepare to take on the Dark Overlords of Durham tomorrow night. QTU administrators, burned (ahem!) by negative press coverage of student riots celebrations that have followed recent Duke games, are being proactive this time in trying to manage the violence youthful exuberance likely to erupt. There are tee-shirts! Student marshals! A sanctioned bonfire! Holy-moly, turtles, there's even a prayer rally!

Moose thought that last bit was an especially nice touch, figuring the point was to try to commandeer the support of the Almighty in the effort to defeat the third-ranked Overlords, who got spanked hard by unranked St. John's at Madison Square Garden this past Saturday. I mean, come on, sports fans, Jordan Williams can't do it all on his own, can he? Anyway, turns out the prayer rally is for safety and sportsmanship, not for an effective perimeter defense, but Moose is hoping one of the faithful will sneak in a tiny request for the latter along with the former. Shoot, as long you've got the Big Guy on the line, you might as well go for it, right?

Do we need to make it clear that we don't take lightly these concerns about public safety and reputation? Do we need to say that of course we hope students will go bonkers in their expressions of public happiness or disappointment without breaking laws -- and that this time the local constabulary won't decide to kick the crap out of kids who don't appear to be doing anything wrong? Fine. We said it. Now, can we get back to figuring out how the gritty yet inconsistent Non-Lady Terps are going to crush the Evil Empire? We've got a game to win, people, and I've got two words for you: free throws.

Peace out, and may good conquer evil, always and everywhere.

(Photo Credit: Terrell N. Roberts, via. William Wang alleged he received these wounds in a confrontation with Prince George's County Police after a Maryland-Duke basketball game on March 4, 2010.)
Posted by Roxie Smith Lindemann at 11:10 AM