Holy feather boa, Batman, what a great week it's been for teh Gayz. I mean, srsly, not only do we have the Obama administration declaring it will no longer defend the constitutionality of the odious and patently unconstitutional Defense of Marriage Act in court and the Maryland legislature on the brink of legalizing same-sex marriage right here in Roxie's World, but with the announcement Friday that Jeremy Bernard is taking over as White House social secretary, it would appear that the nation has its first official Sassy Gay Friend! 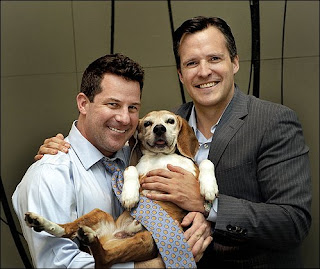 (Photo Credit: Washington Post. WaPo caption: The new White House social secretary will be Jeremy Bernard, left with ex-partner Rufus Gifford in 2009. He will be the first male and openly gay person in that job. [Roxie's World's bonus comment on the photo: The beagle's name is Lucas. Gifford got custody of him in the split from Bernard.])

Several burning questions arise from this big fat rainbow of happy gay news, but surely the most important is,


How in the name of dog did the republic survive for 235 years without an official Sassy Gay Friend?

Think about it, my pretties. Imagine all the calamities that might have been avoided had we only had a First Fag keeping watch over the nation's taste: a bombastic, unsingable national anthem; a national color combo that only an (un-gay) sailor could love; a presidential residence that hasn't hosted a tea dance since the Buchanan administration; the Nixon years. Won't we all sleep more peacefully knowing that the social and cultural life of the White House will be managed by a wealthy Texas-born mo known for his "wild" sense of humor and his obsessive attention to detail? Of course we will, darlings. You need an event planner, you turn to the people who invented the field. You've got a job that requires a tricky combination of charm, diplomacy, and logistical wizardry, you turn to a community that survived centuries of prejudice and oppression by cultivating precisely such skills. Oh, and if a certain attractive member of that community also has deep connections to the prickly fat-cat donors you'll need to seduce all over again in order to get re-elected, well, so much the better. A bit of lavender icing on the cake, as it were.

You can't blame us for feeling a little giddy in the face of all this news, some of which ranks as genuinely amazing. Heck, even our queer legal-eagle pals up at the Columbia Center for Gender and Sexuality Law seem to have gone a bit daft with excitement. Earlier this week, the Center's usually super-serious blog posted a hilarious Xtranormal cartoon staging a conversation about marriage between Supreme Court (In)Justice Antonin Scalia and Yale uber-queer Michael Warner. (Click on that link. Your week will go better if you spend a couple of minutes entertaining the thought of Warner and Scalia standing in an alley calmly debating how a variety of non-procreative sex practices fit into their notions of a good life.)

You also can't blame us for feeling mighty proud of the brave band of openly gay Maryland legislators who testified before the House Judiciary Committee on Thursday about what the pending marriage equality bill would mean to their lives and relationships. Watch this vid, which offers snippets of all their testimonies, including that of Heather Mizeur, who represents Roxie's World in the House of Delegates. (H/T Dan Furmansky.)

We've said it before, and we will no doubt say it again: Marriage is not the be-all and end-all for LGBT equality. It is not the battle we would have chosen for queers in the 21st century, but it has emerged as the dominant civil rights issue of our time. It is not a battle we can afford to lose or choose to ignore, no matter how skeptical we are about the institution of marriage and the set of privileges tied to it. Don't like marriage? Then don't enter into one, but don't kid yourself that that "choice" means anything if you don't have the same rights straight citizens have vis-à-vis civil marriage. (We reflected some on this matter in last year's post in commemoration of Moose and Goose's anniversary.)

The arc of the moral universe bent a little closer toward justice this week in the United States. That's a good thing, and we offer a hearty PAWS UP to all the local and national heroes who put their hands on the arc and pushed it in the right direction. Peace out.
Posted by Roxie Smith Lindemann at 7:53 PM