Imitation Is the Sincerest Form of Bloggery

A Note from Moose to a Sister in Pseudonymity 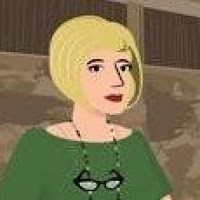 Could I borrow your pseudonym for awhile? I mean, I like mine just fine, despite the obvious challenges of trying to be taken seriously while impersonating a dead dog. Still, I'm not complaining. The old sweater really does feel pretty comfy, if you know what I mean -- and I know you do. Anyhoo, I was hoping we could come up with some kind of barter arrangement whereby I might borrow your moniker from time to time in exchange for, well, maybe delicious low-fat recipes, since I have followed your fine example and embraced a healthy new Lifestyle Adjustment Program. (It's going great, thanks, but do you think there is any correlation between blogging and the need for such adjustments? I have found myself wondering about that a lot recently, while pedaling away on the stationary bike in the basement and not blogging.)

Here's the thing, Dr. C.: Life feels pretty fricking Crazy right now, which is why I'm thinking your pseudonym might be right at home here in our quirky little corner of the blogosphere. If we can't have your name, maybe we'll just borrow a mode you use from time to time of ticking off a list of things you have to do. Your lists both impress and exhaust us, but I'm realizing that my own calendar lately has been jam-packed with meetings, tasks, and Super-Important Things to Do. For instance, in the last week, I have:

This is all in addition to the usual spring tasks of teaching, gearing up for the (fabulous!) lecture series and symposium my program annually organizes, and watching basketball. Lots and lots of basketball. Hey, a girl can't work all the time, and there's stuff worth watching in the Comcastle these days.
It's the Crazy-ness of spring, I guess, exacerbated in my case by bio-familial matters that are currently absorbing a certain amount of time and a great deal of emotional energy. For now, I am finding it impossible to blog about those matters, even from behind the protective shield of my -- or your! -- pseudonym. You might have noticed that I held back in the. recent. conversation. about. pseudonymity in the academic blogosphere, sparked, in part, by the Journal of Women's History roundtable on feminist blogging to which I and the real people behind Tenured Radical and Historiann contributed. I stayed out of the fray in part because I felt I had addressed the matter in the piece I contributed to the roundtable, "The Madwoman With a Laptop: Notes Toward a Literary Prehistory of Academic Fem Blogging." In explaining the significance of my title's allusion to Sandra Gilbert and Susan Gubar's monumental reassessment of 19th-century women's literature, I argued for the enduring attraction of pseudonymity, even for those of us who have published books under our real names:

[T]he Madwoman With a Laptop has discovered the lure of publishing outside the usual channels as someone other than her (public, official, professional) self. Her words are, by design, un-authorized, disowned, but it is from this self imposed otherness, this cultivated marginality that they derive their subversive force. Her speech echoes the ravings of the hidden hysteric, the whispers of the churchwomen after the service, the gossip of friends from girlhood, the raunchy wisdom of middle-aged women talking sex, pleasure, menopause. There is a lot of Emily Dickinson in this postmodern Madwoman, playing fast and loose with identity, reveling in the space opened up by declaring oneself a delighted “Nobody” rather than a dreary “Somebody.”

Here is my bottom line on the matters of trust and truth that always seem to come up in these discussions of pseudonymity: A liar will lie even if his real name is attached to the words he speaks. (See, for example, Reagan, Ronald W., who once accidentally declared that "Facts are stupid things," the only true thing he ever said.) A truth-teller, on the other hand, will tell you the truth no matter what he calls himself. (See, for example, the searingly honest books published under the fake name of Mark Twain.) When it comes to evaluating the veracity of what you read in the blogosphere, you'd be well advised, as D. H. Lawrence might have said if he had lived to surf the Interwebs, to trust the blog, not the blogger. ("Never trust the artist, trust the tale," Lawrence wrote in Studies in Classic American Literature. "The proper function of a critic is to save the tale from the artist who created it.") Truth is more than mere facts, and a slanted telling of the truth may be the most effective means of conveying it. What's in a name? A lot, but nothing close to the whole truth.

And yet: The comfort of my assumed name is not enough to permit me to speak freely of those bio-familial matters to which I alluded earlier. Not yet anyway, not even here in a world called into being nearly five years ago by love and the threat of loss.  Bear with me, darlings. I don't mean to be cryptic or coy. I am trying to explain why posting has been light around here lately. I am edging my way forward on what feels like new terrain, trying to figure out how much I can or should reveal in this space of public/private intimacy. It isn't easy. In fact, it's a little Crazy-making.

For now, I will let a picture stand in for all the words I am not prepared to write. It's borrowed from a 2007 piece called  "The Impossibility of February," from artist Maira Kalman's gorgeous illustrated blog on the New York Times website. I offer it with love for a woman who, alas, does not have a little dog to be her faithful companion in illness. We got your back, Mom. I swear to dog. 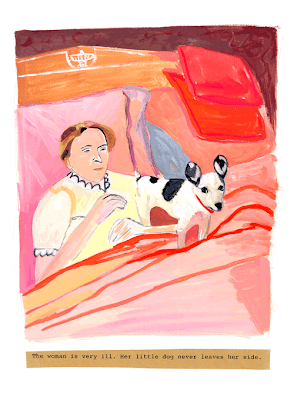 Yours sincerely,
Moose
Posted by Roxie Smith Lindemann at 11:56 PM