So we will comment for her, in the manner of our most excellent blog buddy, Historiann, as a project for the brand new blog, The Pseudonym Exchange (for those times when your own pseudonym just won't do).

Why? Because, darlings, some jobs call for a lasso, not a leash. Read on.

* * *
Veteran (by which I mean antediluvian and, apparently, anti-a whole bunch of other things) CBS newsman Morley Safer is "sorry" that a nasty little dispute over gender inside an exclusive Manhattan club called the Century Association (whose website, when we checked, was, conVENiently, "temporarily down for maintenance") has "become public." Translation: I am a big dumb wanker, and now everybody knows it! Poor me! No fair! 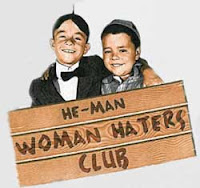 The New York Times declares that Safer has "ruffle[d] feathers" inside the club (whose members include -- get this! -- Henry Kissinger, Chuck Close, and Meryl Streep) in a series of e-mails over whether the Century should sever its ties to an all-male club in London, the Garrick, which permits women to enter only in the company of a man -- presumably, you know, a male member. No word on what Hank, Chuck, or la Meryl thought about the matter, but Safer, who strongly supported maintaining the club's relationship with the Garrick, went ballistic on Centurion Catharine R. Stimpson (English prof at NYU, founding editor of Signs, and a former president of the MLA) after Stimpson joked in an e-mail about taking the risk of seeming "whining and self-pitying" and then going on to list "10 unpleasant ways that she had been described by fellow Centurions because she advocated cutting ties with the Garrick." (Oh, what Historiann would not give to see that list!) Safer, according to the Times, "pounced" on Stimpson's joking self-description in his reply, which the Times somehow obtained, despite "club rules [that] strictly prohibit members from discussing internal matters with the news media." See if you agree that "pounce" is the right word:


“You’ve taken the risk and indeed you are as you describe: ‘whining and self pitying,’ ” he wrote to Dr. Stimpson and others. “You may also add to that, humorless and vindictive. And how about. Lacking in the common decency of that ancient saw: ‘Live and let live.’ So you can add nosy to those qualities that you catalog with such pride.”

Wow, Morley, you can haz misogyny much? Whining, self pitying, humorless, vindictive, lacking in common decency, nosy. How could you have left deep-voiced, castrating, and snake-haired out of your toxic stew of woman-hating imagery? Don't hold back, Morley! Let the old girl have it, why don't ya?

Now, in fairness to Mr. Safer, Historiann is compelled to acknowledge that Stimpson and women generally were not the only targets of his venomous rage. Earlier, in defending the right of clubs to maintain discriminatory policies, Safer engaged in a classic bit of slippery-slope rhetoric that is a hallmark of violated privilege. Again, as the Times reports it:


“What will be next?” he asked. “Disassociation with clubs that do not cater to vegans on their menus? Kosher dining rooms? Special facilities for nudists and transsexuals? Abolition of ‘Centurion’ to describe our members, given that the term is, according to the OED, derived from the all-male Roman army?”

Apologies to all of my Jewish, vegan, nudist, transsexual readers -- I should have put a trigger warning for rank stupidity ahead of that quote, I suppose.

What will be next? Gosh, Mr. Safer, I don't know. Perhaps you'll be run out of town like veteran UPI journalist Helen Thomas was after she made inflammatory remarks about Israel last year. Or perhaps you won't be, since male privilege was, last time we checked, still alive and well and doing a fine job of protecting members of the club whose "private" musings become uncomfortably public.

Here's what I do know, big fella: Next time Historiann comes down from the high desert and heads to the Big Apple, she just might drop by the Century, lasso in hand, to knock back a couple of pisco sours with Meryl and Kate. But don't you worry your (not so) pretty little head -- We and our lady parts will keep our distance from you and Kissinger. You two can drink port and look up words in the OED until H-E-Double Toothpicks freezes over. Me and the feminazi cowgirls got some serious work to do.

So, tell me, readers: What buttons does the sorry saga of Safer, Stimpson, and the Century push for you? Share your stories of Dinosaurs Still Roaming the Earth in comments, will you? I've got to feed the horses, clean the barn, and run six miles up a mountain and back before class this afternoon. Talk amongst yourselves and I'll check back in later to see how the revolution is progressing.

(Image and Inspiration Credits: Historiann)
Posted by Roxie Smith Lindemann at 11:22 AM