Whew! That's a relief! And we didn't even have to bother NOT to vote! And now our buddy GlassPen won't have to worry that our refusal to vote will deliver the governor's mansion to the former governor known as Bobby Haircut! And the fauxgressive Irish rocker known around here as You, Sir, Are No Jack Kennedy will have another four years to campaign for the higher offices for which he clearly believes he is destined by making the kind of cynical, short-sighted moves that pass as Democratic profiles in courage these days!

Roxie, you may or not be thinking, has death impaired your ability to process information? What do you mean WaPo has called the election?

Let me 'splain it to you, darlings. WaPo published a poll today showing that current Gov. Martin O'Malley has opened up a sizable lead over his opponent, former Gov. Robert Ehrlich, whom O'Malley defeated four years ago in the heavily Democratic state of Maryland. 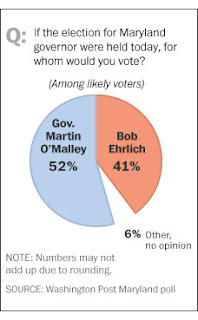 The poll indicates that Ehrlich has made the sale with Republican voters (yes, both of them) and is leading by 20 points among Independents, but O'Malley has a 64% favorable rating among all voters and 87% of Democrats say they are inclined to vote for him. (Some deets on the poll are here. The full data dump is here.)

O'Malley also has a sizable cash advantage and is using his money to get his pretty face and determined jaw on the teevee. He's on the air constantly with slick ads that alternate between emphasizing his record of making supposedly tough decisions in difficult times and trying to terrify voters with reminders of the spooky-scary Bob Ehrlich.

Ehrlich isn't doing himself any favors. He was actually pretty moderate as governor, but he seems to have taken a sip or two of tea in deference to the lunacy currently gripping his party. He criticized Maryland attorney general Doug Gansler's February ruling that the state would recognize same-sex marriages performed in other jurisdictions, calling it "government experimentation with the state's social fabric." He has also proposed rolling back a 2007 increase in the sales tax without saying a word about how he would replace the $600 million in lost revenue. One of the nice things about Maryland voters is that they are slightly less hysterical about tax issues than voters in many parts of the country, perhaps because a sizable number of them work for the federal gubmint and lie awake at night wishing Barack Obama truly were a socialist.

Given that, though, it's disheartening to see that Maryland's Democrats don't seem concerned that O'Malley asked the state's 70,000 employees to shoulder a disproportionate share of the burden of closing the budget gap, resorting to furloughs three times in three years rather than, as we have suggested before, taking on the state's liquor lobby and finally raising taxes on beer, wine, and distilled spirits. O'Malley leads Ehrlich on all the questions about who voters trust to manage the economy, education, crime, taxes, and the environment. How confident is the O'Malley campaign right now? Confident enough that Obama will be headlining an event for the MD gov next week, the first time the president has done that for a Democratic candidate since January (when he campaigned for, um, losing Massachusetts senate candidate Martha Coakley).

Wevs, kids. Moose saw the poll news this morning and thought, Fine. O'Malley is comfortably ahead. I think I'll show the same respect and support for the work he's done for the state as he's shown for the work Goose and I have done for the state. I think I will just stay home on election day -- Hell, maybe I'll take it as a furlough day! I've got several more of those to schedule this year! (Between them, the moms will have 11.5 furlough days this academic year.)

And then Moose realized she can't take a furlough day on election day because it is a Tuesday and she teaches. Furlough days should be scheduled in a manner such that there is no class disruption, intoned the e-mail faculty and staff received from QTU's office of human resources yesterday.

Because in the ugly autumn of 2010, in the Democratic state of Maryland, political courage means that you pretend there are no consequences to tuition freezes and salary cuts and budget reductions. You turn your head away from the damage you've done, gaze at the camera with your rock star's smile and your lawyer's rectitude and assure us you are brave and strong and on our side.

At least two of Maryland's 70,000 state employees beg to differ. No, we must not let the perfect be the enemy of the good. Nor, however, should we delude ourselves into thinking that cowardice is courage or that getting re-elected is the highest political goal to which we can aspire. For three years, state employees have carried the load for Martin O'Malley and 6 million fellow citizens who gave up not much of anything to help the state weather its fiscal storm. We respectfully decline to endorse this course of action by casting a vote in favor of a second term for Gov. O'Malley. If he gets one, fine. We hope he will spend it making wiser and more equitable decisions.
Posted by Roxie Smith Lindemann at 11:19 PM