From the Department of Hey, This is Way Better Than Apples: Our favorite clothing retailer for sensible gals of a certain age is offering discounts to teachers: 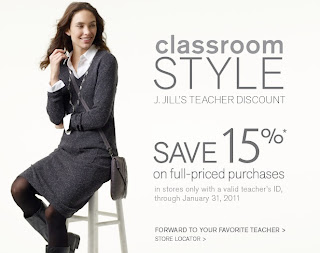 Why, it's as though they've read a fabulous series of blog posts on the subject of Excellence Without Money in higher education! Where could they have stumbled upon such a thing? Here? Here? Here? Perhaps they heard we were giving out advice on how to dress for your furlough and figured there was some vast under-served and under-paid market of women whose favorite colors are charcoal and gray. (That's a joke, actually, and it is not intended to suggest that there are currently 947 pairs of black pants hanging somewhere in the closets of Roxie's World. Moose is pretty sure there are at most 891 pairs of black pants in the house, but she is refusing to count sweatpants and is overlooking the 44 pairs in the giveaway pile in the hall closet.)

Thank you, J. Jill. The teachers of the world appreciate your shrewd marketing. Don't know if you'll be able to get Historiann into the store, though. She has been indulging in a shoe and clothing fantasy far afield of anything we've ever seen in your catalogs. 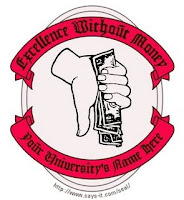 While we are on the subject of Excellence Without Money, Non-Fashion Division, here are a couple of pieces you really must go read. (We've been remiss about keeping you up to speed on this topic, but my typist has discovered that teaching a course on blogging cuts significantly into the time a girl has available for blogging. Sorry, darlings, but she is dancing -- and typing -- as fast as she can!) Anyhoo, there's an excellent interview with our blog boyfriend Chris Newfield that was published on AlterNet a few weeks back. It's a great distillation of his thinking about what he has termed "the war on public universities," which he argues has been going on for several decades now, and its relationship to the recent devastating budget cuts in the University of California system and elsewhere. Meanwhile, back on Chris's indispensable Remaking the University blog, there's a guest post by Gerald Barnett of the University of Washington on the funding "free-fall" shaping up in Seattle. The piece is brilliant on what we consider to be the crux of the problem we named Excellence Without Money: Campus administrators who publicly pretend that budget cuts, while damaging, don't undermine the quality of institutions. It's a long piece that takes up a number of topics, including how the press covers these issues and how universities hurt themselves by carrying on a charade. Here's a passage that will give you a good sense of what Barnett is up to, but you should click over and read the whole thing:


The problem for universities, and for the reporters, is that university administrators are not coming clean on why there are university budget problems. It is not just that the states are no longer supplementing the budgets as they used to. Yes, that is a bad thing, a bad thing in the context of other bad things. Rather, it is the priorities that university leaders place on the spending of the money they do have. It is not reported that there are huge cuts to student instruction. The university issues no press releases or even brusque reports about this. These cuts, like cuts to department staff, happen in silence. There will be no departure notices in the local paper, like the notices when the university hires another senior administrator.  Every student knows (and I have a daughter at UW) that there are fewer courses offered, these are harder to get into, with less information about them, with less and poorer quality instructional support—and all this at substantially greater cost. This is not within the definition of “excellence."

He ends by saying that university administrators are well-intentioned but intellectually dishonest in these situations. Often, we reluctantly acknowledge, that term is justified. Though never on our campus, of course.

Which for some strange reason makes us want to end by passing along a post Margaret Soltan put up earlier today that got our attention because it conjoined the terms "University of Illinois" and "Manure Central." We clicked straight over, concerned that our once furloughed friends out in Shampoo-Banana had been visited by yet another crisis or scandal, given Soltan's knack for being first on the scene at any academic Augean stable in need of sweeping. Alas, the meaning in this instance was literal, but that link is amusing nonetheless -- and offers some very fetching animal photos, too, I might add. Props to the designer who had the nerve to use a rich poo-brown background on the website for the extension service's manure management program. Nice touch!

Still, Manure Central -- Don't you think that would be a swell name for an academic admin blog? We'll have to see if we can get Moose to bring that up in class tomorrow. She and her students have recently been discussing the all-important matter of blog names, so who knows? Peace out, darlings, and sweet, manure-free dreams to you.
Posted by Roxie Smith Lindemann at 10:26 PM