Like our blog pal Historiann, we've pretty much been keeping mum on the election season, because the prospect of a Democratic bloodbath has left us sad, speechless, and disgusted, but also determined, for the first time in our political lives, to abstain from certain races. Sorry, fellow citizens, but we have had it. We refuse to hold our noses and support Democrats who run as progressives and govern as center-right weenies who pick the pockets of state employees rather than making the case for shared sacrifice during a period of economic contraction. Our line on this election is that we gave -- and gave and will be giving again -- at the office. You took my money, but you have not earned my vote.

Does that sound selfish and bitter? Bitter, perhaps, but if we were selfish we might be vulnerable to Gov. Martin "You, Sir, Are No Jack Kennedy" O'Malley's sudden, mealy-mouthed, election-year conversion to the cause of same-sex marriage. O'Malley, a Catholic, has been a supporter of separate but equal civil unions. Now that his likely opponent in the race, former Gov. Robert Ehrlich, has come out against s-sm in order to boost his cred with both of Maryland's registered Republicans, O'Malley has boldly declared he would sign a bill legalizing gay nuptials in the state if the legislature passed it -- knowing full well that will happen shortly after hell freezes over and MD House Speaker Michael E. Busch (D-Anne Arundel), who opposes marriage equality, takes a walk across the Chesapeake Bay. Wow, thanks, Gov. And we want you to know that we support any kind of union "in which [you] choose to enter and raise children and all the issues that go with that." Can't wait to carve those inspiring words on the front of the Irish pub and crab house you ought to be managing Mount Rushmore!

Enough about us and our petty parochial concerns. The nation has clearly gone off its collective rocker in this frighteningly silly political season. We need help, and we need it now.

Oh, who are we kidding? What we need is a little something to distract us on a pleasant Friday afternoon, to take us on a magic-carpet ride right past the expected nightmares of 2010 and onto the miracles of 2012. But where can we turn, who might we look to to perform the miracle of combining progressive vision with pragmatic skill? Who could save us from the gutless, the weasels, the weenies, and the hacks? 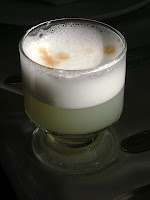 Heck if we know, kids, but a rich dentist from Chicago has an interesting idea. Check out the vid below, which the good doctor bankrolled and which is being billed as the first ad of the 2012 presidential campaign, and tell us what you think. Meet us at Ishmael's, the seedy yet cozy bar around the corner from the global headquarters of RW Enterprises, LLC. We'll order up a big batch of Historiann's favorite cocktail, the pisco sour, and maybe she and my typist will regale us all with their war stories of being pro-Hillary bloggers back in Aught-Eight. Of course, that was before the nation was transformed by the gospel of Hope, Change, and the Bliss of Transcending All Differences Everywhere. Right? Ri-i-i-ght.

Wevs, my hopeful ones. Click on the vid, which we pass on by way of amusement, not endorsement, and belly up to the bar. Cocktail hour starts now. Better get here before Moose eats all the mozzarella sticks. You know how fond she is of those. Peace out, and have a delicious weekend.

(H/T to the Clintonistas in the Half Moon Bay office of Roxie's World who sent us the vid. Get out your hammers, girls. We've got a glass ceiling to crack.)
Posted by Roxie Smith Lindemann at 5:26 PM