Or, Lessons for Obama in Adrian Fenty's Big Electoral Meltdown 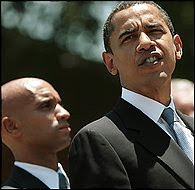 The moms are citizens of Maryland, which means they didn't get to weigh in this week on whether the Boy Wonder Turned Big Loser Adrian Fenty deserved a second term as mayor of the District of Columbia. They were busy abstaining from the question of whether Maryland Gov. Martin "You, Sir, Are No Jack Kennedy" O'Malley deserves four more years to prove his fauxgressive mettle by picking the pockets of state employees rather than fighting for more equitable ways to solve the state's budget woes. (Let's see, kids. Maryland hasn't raised taxes on beer and wine since 1972 and hasn't increased taxes on distilled spirits since Eisenhower was president! What say we raise our glasses to a modest increase in the cost of one of our favorite hobbies? I'll drink to that, won't you? Or are you, like O'Malley, comfortable forcing 70,000 hardworking state employees to shoulder the burden for 6 million citizens of Maryland? Perhaps you are. O'Malley was comfortably renominated in Tuesday's primary, setting up a rematch with the guy he defeated in 2006, Gov. Bob "Thanks, But I Don't Drink Tea" Ehrlich.)

We digress. Much ink is being spilled in an effort to answer the burning question of how Fenty, who actually got pretty high marks from voters for the job he was doing, managed to lose to DC Council Chairman Vincent C. Gray. Fenty's defeat is no doubt complexly entangled in the racial politics of DC, as this story and this opinion piece by Kojo Nnamdi both argue. (Lesson #1 for Team Obama: That whole post-racial thing? It may not wear well over the long haul in minority communities that feel under-served and taken for granted.) It probably also has a lot to do with the young mayor's reckless disregard of the advice he was getting from strategists who told him voters had soured on him. Perhaps all we need to know about this campaign is that Fenty spent the Sunday before the primary vote competing in a triathlon, while Gray made appearances at three black churches. (Lesson #2 for Team Obama: Fitness, schmitness. Instead of "Let's Move," you might consider "Let Us Pray" as a slogan for the re-elect. It's cheaper than a second stimulus package, and if you campaign on it Republicans will suddenly go all anti-God, which would be fun to watch.)

Finally, we definitely agree with those who say it was a mistake for Fenty to allow DC Schools Chancellor Michelle A. Rhee to campaign for him -- as a private citizen, of course -- in the closing days of the campaign, when it was clear that her hard-charging (or brutally insensitive, depending on your point of view) campaign of school reform was alienating wide swaths of the electorate. Rhee made the mayoral primary a referendum on her, implying she would be unlikely to continue in her post if Gray won. After voters roundly rejected her appeals on Fenty's behalf, she declared the results were "devastating, devastating" for the District's schoolchildren. Rhee's behavior throughout the campaign showed an astonishing lack of political judgment, but her churlish scorn for voters in its aftermath suggests she was never cut out for public administration. (Lesson #3 for Team Obama: Think you know more than voters do? Tough $hit.)

That's all well and good, but it fails to solve the mystery at the heart of the Case of the Iron Man Who Got Whupped by the Old Gray Ghost. The armchair pundits of Roxie's World, who can't vote in the District but are fed a steady diet of DC politics through a range of local media, have given considerable thought to this question and are confident that they have an answer. Are you ready? Here it is:


Adrian Fenty annoys the crap out of any TV viewer over the age of 45.
What? Have the cranky old dykes of Roxie's World succumbed to ageism? Oh, maybe a little, though I'm sure we could come up with a list of leaders we admire who aren't card-carrying members of AARP. Really, I swear -- We'll get back to you on that real soon. Our point here, though, is that Fenty's public style grew increasingly grating over time. His youth and energy worked well for him when he knocked on seemingly every door in the District in 2006, but four years later you looked in vain for any sign that he had grown into the office, taken on any hint of the gravitas leaders typically acquire by holding positions of authority. In moments of tragedy, such as the Metro train wreck in June, 2009, you could hardly wait for Fenty to step aside and let one of the grownups talk about how the situation was being handled. In more political contexts, he came across as petulant and brash, like a student council president who couldn't understand why the other kids wouldn't support his plan for putting more vegetables on the menu in the cafeteria. In the race against Gray, Fenty sounded callow and defensive, while Gray came across as thoughtful, conciliatory, and concerned about process and all of the District's citizens. (Need proof? Check out the candidates' opening statements in a pre-primary debate.)

Is it fair to criticize a candidate on the fuzzy matter of style? Perhaps not, except that it's clear the District's voters were put off enough by Fenty's demeanor that they turned him out of office while acknowledging that he had produced some positive, concrete results for the city. Is there a Lesson #4 for Team Obama in this result? Well, some. folks. seem. to. think. so.

What do you think, my pretties? The crystal ball is in your court. Peace out.
Posted by Roxie Smith Lindemann at 5:37 PM