In Sorrow and Solidarity 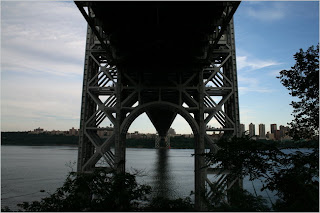 (The George Washington Bridge over the Hudson River. Rutgers University freshman Tyler Clementi leaped off the bridge to his death on Sept. 22, after his roommate showed video of him being intimate with another man on the Internet. Photo Credit: Richard Perry, New York Times)

A candlelight vigil will not change the world. A video will not bring down the socio-cultural machinery that encourages violence toward individuals and groups seen as threateningly non-conforming in relation to sex and gender norms. A "Safe Space" sticker on a resident assistant's door won't stop a drunk kid with a baseball bat determined to find a fag to bash in a dorm hallway on a Saturday night -- or a sober kid with a camera, a gay roommate, and the ability to stream live video.

We know that none of these gestures is sufficient to end the violence aimed at sex and gender queers of all ages. Nor do they offer much to the targets of such violence beyond the perhaps hollow comfort of knowing that not everyone wishes them dead. And the dead, of course, are beyond even that hollow comfort.

Nonetheless, we see more in these gestures than salvific wishes and sentimental longings for some easy, individualized way to achieve a feeling of having done something in response to verbal and physical assaults on LGBT persons. Insufficient as they may be, such gestures are nonetheless important, because they demonstrate our determination to be kind rather than unkind. That determination is not nothing, and it is not merely sentimental. Henry James was no fool. He knew that kindness made life bearable and its absence made life unbearable. He knew that if we forget kindness we have forgotten how to be in relationship with others, for kindness is above all being considerate of others. Kindness comes from having the capacity to imagine how one's words or deeds will affect another -- precisely the capacity Tyler Clementi's tormentors seem to have lacked.

Technology hasn't made humans less kind than they were in some non-existent machine-free past. It has only amplified the sound and accelerated the speed at which our unkindnesses circulate. We shouldn't disparage any act of kindness or any effort to foster greater kindness in the world. Instead, we should commit ourselves to creating a world in which kindness travels as quickly and gets as much attention as its opposite. Yes, it's corny and naive to promise that "It gets better," but it's better to be naive than silent  or cynical when kids are killing themselves. (Here's an even better response, though, from another video in the "It Gets Better" campaign, from a young dyke of color who critiques the false assurance of the campaign's slogan while insisting that the victims of bullying will get stronger, more able to love themselves and more equipped to deal with what the world dishes out. Go watch it. H/T)

If we could, we would stand in the rain this evening, on the campus of our alma mater, with students, faculty, and friends, to honor the memory of Tyler Clementi and to protest the brutal unkindness that appears to have led him to take his life. You deserved better, Tyler, as did all the other young queers bullied to death in recent weeks. We stand for all of you, against hatred, fear, and thoughtless violence that calls itself pranksterism. We can't guarantee it will get better, but we promise we will work like hell to try to make it so. Peace out.

Update (early Monday a.m.): Here are some local links on the Sunday night vigil at Rutgers: 1) The report in the Star-Ledger, which says there were close to 1000 people in attendance, and 2) a photo and commentary from our friend Kate, a member of the Rutgers faculty. Send more links if you have them, and we will update as necessary.
Posted by Roxie Smith Lindemann at 8:44 PM