Rather than apologizing for yet another prolonged blog silence, we'll post a picture of a cute little lion cub at the National Zoo being tossed into the chilly water of a moat to see if it can swim before it is too big and dangerous for a human trainer to be in the water with it. You may regard this photo, which was above the fold on the front page of the dead-tree edition of today's WaPo, as an apt metaphor for -- take your pick -- the state of the moms at midterm, the state of the Dems at midterm, or the state of your own frantic self paddling around in a chilly moat of student papers and meetings and assorted impossible expectations. The cub has no name yet. Feel free to call him by yours. 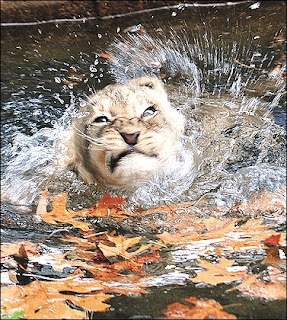 Welcome to the world, little fella. Sink or swim. Suck it up, dude, but try not to suck in a mouthful of dead leaves in the process. That would be unpleasant.

Meanwhile, in lieu of a post, which would require brain power that isn't currently available, here are a couple of updates and delectable treats from the Intertoobs and other places:


That's all we got for now, kids. Except, of course, for the musical mood-matcher tucked in below, which will explain our post title to those who haven't yet figured it out. Mama was right, my little swimming lion cubs. There will be days like this, but soon enough you will find your way to the safety of dry land, and before too long you will be big enough to bite the hand of the jerk who tossed you into the water. Keep paddling, and keep eating. Tomorrow is another day. Peace out.
Posted by Roxie Smith Lindemann at 10:51 AM