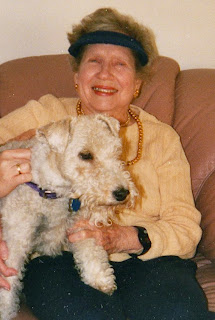 Sorrow has come to Roxie's World again, my darlings. We are sorry to tell you that the Mother of the Goosians, a fine and feisty Texas sweetheart by the name of Hattie Mozelle Owens Smith, died yesterday morning in Austin. She was a beloved mother, grandmother, and great-grandmother, and, as Moose put it in an e-mail to friends, the world's greatest mother-out-law, which is how she came to think of this devout Church of Christ member with whom she built a warm and close relationship over the course of a quarter century. (You can access an obituary here.)

Mozelle, as she was known (Mo for short, Mammo to her grandkids), combined her faith with a strong commitment to social justice. She was an LBJ Democrat (indeed, darn near the last one, we fear) who hated war, gave generously to those in need, and thought the Bushes were disastrous for Texas, the nation, and the world. She braved the bizarreness of her state's caucus system to cast a vote for Hillary Clinton in the 2008 primary campaign and marveled at the possibility that the country might have its first woman president. (She was born in 1919, the year before women got the right to vote. Oh, and she ended up being pretty darn happy the nation elected its first African-American president, by the way.) She lived her faith and saw good in everyone, even heathen lesbians who cussed too much and didn't visit Texas nearly often enough in her opinion.

Mozelle was 90 years old and in reasonably good health until recently, despite having lost her sight to macular degeneration in the last ten years. Her blindness was an inconvenience, but it never impeded her lively curiosity. She was a voracious reader of talking books and made her way through most of the novels of Willa Cather not long after Moose published her study of the Nebraska writer. When she finished Cather's most famous book, My Ántonia, she phoned Moose up and said, "Now, Moose, I've got a stupid question." Moose laughed and said, "Mozelle, there are no stupid questions." "Well, good, then tell me: What is the deal with this male narrator? Why on earth would she tell the story that way?" (Yes, Texas women speak in italics. They have very expressive voices.) Moose threw her head back and laughed again. "Heck, Mo, that is not only not a stupid question -- That's the question literary critics have been trying to answer for more than seventy-five years!" (Apparently non-Texas women lapse into italics when speaking to Texas women. It's contagious.) They spent twenty minutes discussing the joys and the puzzles of this beautiful yet baffling book. Mozelle was a good reader because she had a great capacity for empathy and a razor-sharp b.s. detector. Those were qualities she had in common with Willa Cather and, perhaps, her daughter-out-law.

We will say more on the subject of this late, great woman when we can, but the moms are off to Texas bright and early tomorrow morning to celebrate Mo's life and legacy, so for now we will let Cather have the last few words. They come from that book Moose and Mo had so much fun discussing all those years ago and include the words Cather chose for her own gravestone. The male narrator, Jim Burden, is recalling a moment alone in his grandmother's garden on his first day on the great Nebraska prairie, where he has just arrived as a young orphan from Virginia. Despite the newness of his surroundings, Jim experiences a sense of calm contentment as he lies on the warm earth beneath the immense prairie sky. He eloquently describes his experience of the moment (and the words on Cather's gravestone are in italics):

I kept as still as I could. Nothing happened. I did not expect anything to happen. I was something that lay under the sun and felt it, like the pumpkins, and I did not want to be anything more. I was entirely happy. Perhaps we feel like that when we die and become a part of something entire, whether it is sun and air, or goodness and knowledge. At any rate, that is happiness; to be dissolved into something complete and great. When it comes to one, it comes as naturally as sleep.

Sleep well, sweet Mo. The happiness you gave in such abundance lives on in every heart you touched.

* * *
With love and thanks to friends and family in many places for kind words, gestures, and deeds. You lift us up, again and always.
Posted by Roxie Smith Lindemann at 9:03 PM