Moose surreptitiously snapped this shot Saturday afternoon down at the Corcoran Gallery of Art's big, splendid retrospective of the 19th-century photographer Eadweard Muybridge, who gained fame for his studies of animal and human locomotion. She was tickled to see she had such a notable precursor in the field of digital (get it? digital?) documentation. (For Moose's [im]modest contributions to the field, go here and here.) 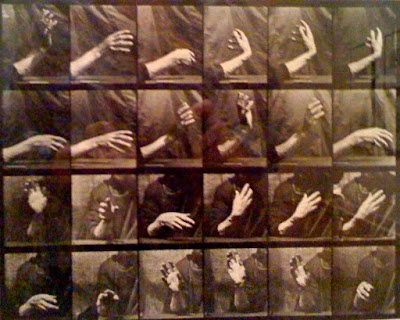 The show, which runs through July 18, is well worth seeing, not only for what it offers of Muybridge's well-known efforts to capture bodies and body parts in motion but also of his less familiar (to us) contributions to the fields of landscape and documentary photography. His photos of Yosemite from the 1860s and 1870s are stunning. Exhibit curator Philip Brookman credits those images with inspiring Ansel Adams to photograph the Yosemite Valley nearly half a century later. (That link takes you to an excellent NPR package on the exhibit that includes a gallery of images from the show and photos of the contraptions Muybridge developed to project moving images. Some of those contraptions, including the zoopraxiscope, are featured in the show as well.)

Oh, and in the unlikely event that you remain interested in the progress of Moose's hand job -- i.e., in how her fractured wrist is doing -- we are pleased to report that she is no longer rocking a Gaga-esque black splint, with sexy black laces, on her left wrist. She still has a fair amount of pain, though, and not much in the way of flexibility. Suffice it to say it will be awhile before she's doing handstands on her yoga mat. I predict a summer of standing poses and perhaps some aerobic lip-syncing to the soundtracks of Glee as she gently encourages the wrist to bear weight again. In the meantime, she is here, typing for you, the good girls, boys, and gender-queers of Roxie's World, because you are the sunshine of her life.

Peace out, darlings. And don't close the blinds when you dance in the living room. Show the world you mean it.
Posted by Roxie Smith Lindemann at 6:40 PM