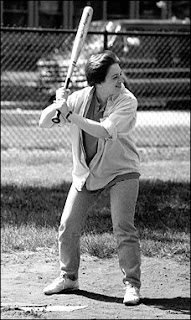 A previously unknown organization, Dykes Against Softball, headquartered somewhere in the suburbs of Washington, DC, issued a communiqué this morning expressing surprise and gratitude to Washington Post columnist Ruth Marcus for saying something sensible on the subject of Supreme Court nominee Elena Kagan, pictured at left playing softball at the University of Chicago in 1993. The Wall Street Journal ran the photo on its front page earlier this week, a move that has been widely interpreted as suggesting that the unmarried Kagan is a lesbian. Marcus said she found the picture "charming" and thought it made Kagan look "like more of a real person and less of a brainiac." (The Association of Real Lesbian Brainiacs immediately denounced that statement as insensitive, but that is another story.)

She went on to say, "Memo to conspiracy theorists: Straight women can play softball, too. Sometimes a softball bat is only a softball bat."

In its communiqué, Dykes Against Softball praised Marcus for her perceptiveness and courage in publicly declaring that, contrary to popular understanding, softball isn't just for lesbians: "Coming in the wake of WaPo media critic Howard Kurtz's brave announcement earlier this week that he -- a straight male -- had his own long history of playing with the big ball, Marcus's column is another encouraging step forward in the painful struggle to undo the deeply rooted and -- to many of us -- deeply hurtful stereotype that lesbians love and excel at softball."

Lesbians come in all shapes and sizes and with varying degrees of eye-hand coordination and athletic interest. While it is true that softball has served as an important means of community-building for non-heterosexual women in a range of times and places, it is also true that many of us feel no connection at all to what some have termed "the lesbian national pastime." Some of us hate team sports. Some of us are terrified of gigantic balls being hurled through space by burly women with extraordinary upper-body strength. Some of us prefer the peace and quiet of the library or the relative safety of the pool hall to the loud, dusty world of the diamond. Some of us don't like to run in our high heels. Some of us think blue jeans accentuate our wide hips. Some of us would just as soon skip the game and go straight to the beer-drinking and the back-slapping.

DYKES AGAINST SOFTBALL is grateful to our heterosexual comrades Ruth Marcus and Howard Kurtz for their courageous contributions to the cause of de-linking lesbianism and softball. It is our sincere desire that this whole episode (which has commanded so. much. attention. that one might actually begin to think it fricking mattered!) might teach a valuable lesson about the dangers of stereotyping. We think every individual, regardless of race, class, gender, sexual orientation, size, or ability, should be free to play -- or not play -- any game, anywhere, any time. Just don't make any assumptions about what team you think we're on, because, you know, some of us girls are really not into the big stick.

Thank you for your attention. Now, can somebody tell us how concerned we ought to be about Elena Kagan's philosophy on executive power? Because, well, call us crazy, but we think maybe that's where some of these big stick issues might actually fricking matter!
Posted by Roxie Smith Lindemann at 9:02 AM