Marquette Withdraws Job Offer to Lesbian Dean Candidate Jodi O'Brien
Which means, of course, that the all-important position of Dean of Lesbians remains vacant. Moose would like to apply. For the benefit of the good Jesuits of Marquette, we offer this link to a not-quite-current version of Moose's CV, where you will find, we promise, absolutely no "strongly negative statements about marriage and family" and, regrettably, no "vignettes on lesbian sex." (How did that happen? I said to Moose. Heck if I know, she replied. Blame it on Willa. She was just not into . . . vignettes.) (And, yes, Death Comes for the Archbishop fans, we know that, technically speaking, that isn't correct. Comic license, 'k?)

We picked this up from Pat Griffin's LGBT Sports Blog by way of Nan Hunter. The Women's Basketball Coaches Association refused to screen the film Training Rules, a documentary about player Jennifer Harris' lawsuit against Penn State's legendary (and legendarily homophobic) women's basketball coach Rene Portland, at its annual conference last month in San Antonio. (The conference was held in conjunction with the NCAA women's basketball championship. Local coverage, from which we've borrowed details of the story, here.) The reason given for not screening the film is that Portland is no longer coaching. She resigned in 2007, after Penn State settled Harris' lawsuit -- Which of course magically resolved the issue of homophobia in women's basketball, so, please, sports fans, let's all just go back to talking about how married and religious and heterosexually reproductive everybody associated with this game is. That's not homophobia, dammit! That's just clean living and good advertising, am I right? Pay no attention to all those big-boned gals on the floor and in the stands. There are no lesbians here, do you hear me? Just, you know, burly girls with incredible strength and ball-handling skills who seem to prefer, um, the company of, uh, well, chicks, but, hey, look at those junior cheerleaders doing their little half-time show. Aren't they just adorable?

People, people, people, let me say it for you one more time, very slowly: Women's basketball would die without the participation and the support of lesbians. Don't disrespect or marginalize your talent pool or your fan base. Silence is homophobia by other means, especially when you go out of your way to promote the "family-friendly" qualities of your program and personnel. You may be a little more polite than the Rene Portlands of the world, but you are still sending a powerfully negative message to queer players and fans. And we think that is unsportsmanlike conduct, plain and simple.

That is all, darlings. Play hard, play fair, and give us a call if the Dean of Lesbians position is available at your school. 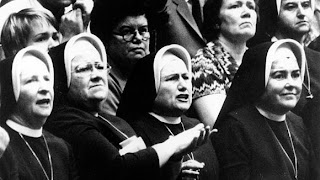 (Nuns cheer on the Mighty Macs of Immaculata University, which many consider the birthplace of modern collegiate women's basketball. No lesbians here either, of course. Photo picked up here.)
Posted by Roxie Smith Lindemann at 11:46 AM