From Janie's Kitchen -- To Yours

Home for the Holidays Edition 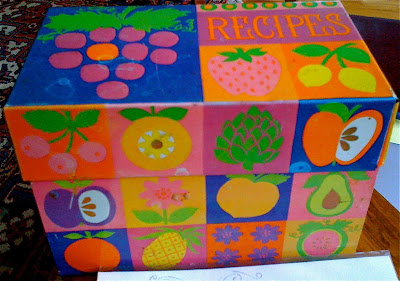 It's the day before Thanksgiving, which means, of course, that it's time to gather 'round the laptop for the ancient ritual of the bloggers' recipe exchange! Our blog pal Historiann is the (mile-)high priestess of this mighty virtual gathering, an estrogen-fueled celebration of the culinary wisdom of women feeding their tribes to the point where everyone in the room is incapable of movement or speech, which is, like, really how most families function best, don't you think? Historiann got her post up on Monday, with links to her previous Thanksgiving posts, so run on over there to check out what the cool kids will be putting on the table this year -- sausage and chestnut stuffing! butternut squash lasagna, for those who perversely believe that vegetarians deserve something other than green beans and mashed potatoes while everyone else gorges themselves on slaughtered birds!

Last year, we shared a recipe Moose picked up from Cooking Light (or, as she calls it, Food Porn for the Conscientious), a simple but fabulous cranberry dish that people actually eat! It's called Cranberry, Cherry, and Walnut Chutney, and we guarantee it will transform your relationship to the humble cranberry. Moose put up a double batch of the stuff last night right here in the kitchen of Roxie's World. That ranked as her culinary triumph of the day, which ended in the rather spectacular culinary disaster of a blender malfunction that resulted in hot Creamy Carrot and Sweet Potato Soup exploding all over the stove, countertop, floor, and, um, Moose. It wasn't pretty, people, and neither was the string of expletives that came out of her mouth as she stripped down to her underwear (I know -- try not to imagine it) and tore through the kitchen, assisted by Goose, trying to save as much soup as she could while wiping the hot gunk off of every surface in the kitchen. Dear Black and Decker, Moose imagined writing to the manufacturer of her new blender, When designing a small appliance, it's probably not a good idea to make the wrong way to do something easier and more intuitive than the right way, especially if doing it the wrong way means hot liquids will explode all over a freakin' kitchen after midnight two days before a major goldurned holiday!

We digress. Suffice it to say that the soup course for tomorrow has been reduced to an amuse-bouche and that Iron Chef Takoma will be removing Black and Decker from her list of recommended small-appliance manufacturers. (They wouldn't have been on the list in the first place, actually. Moose decided she needed a blender for the purpose of soup-making. She was close to a hardware store, a small, independently owned hardware store she and Goose like to matronize when they can. It was an impulse buy, and she didn't have many choices.)

We're still digressing. Okay, this year's recipe comes not from a magazine but from a box, a very special recipe box given to Moose many years ago by her beloved grandmother Jane, who died in 2006 at the ripe old age of 97. Moose can't recall exactly when Janie gave her the small, brightly colored metal box (pictured above) containing a collection of favorite family recipes, some written out in a careful, old-fashioned hand (by Janie [see below]) and some typed (also carefully, probably by grandfather Hermie). (Yes, that's what the Moosian children called their paternal grandparents, who were much cooler than their small-town, middle-class, Germanic appearances might have implied.) She seems to recall that all the girls in the family were gifted with similar boxes, Janie being a gender conventionalist on matters of cooking, despite the aforementioned coolness and her devotion to her queer granddaughter and all her queer granddaughter's girlfriends. (Oh, right, Moose -- as if there were so many!)

Anyway, of all the recipes in the box -- including Sour Kraut Salad (hey, they weren't just Germanic in appearance, you know), Horrible Chicken, and Dee-Lish Coffee Cake -- there's one that has been a staple feature of Moose and Goose's entertaining for years. It gets made for every holiday dinner, every cocktail party, and every New Year's Eve bash that culminates in either a dance party or a midnight walk to the park for one last swig of champagne. Or both. I speak, of course, of Cheesed Olives, a delectable savory appetizer that is easy to make yet adds a touch of elegance to any occasion. It's the perfect accompaniment to martinis, because there's nothing like a nice cheesy dough to absorb ridiculous amounts of gin or vodka. Moose has tweaked the recipe a bit, because olives, like everything else, are bigger than they were in Janie's day and because the lord clearly intended for olives to be stuffed with jalapenos rather than plain old pimentos. The basic recipe is still the one lovingly passed from a god-fearing, Coke-drinking, bridge-playing grandmother to a heathen queer bon vivant with revolutionary dreams and a fondness for show tunes. We pass it along to you -- with love, with gratitude, and with hope that your holiday is warm and happy.

Peace out, darlings. We give thanks for each and every one of you. May all of your revolutionary dreams come true. 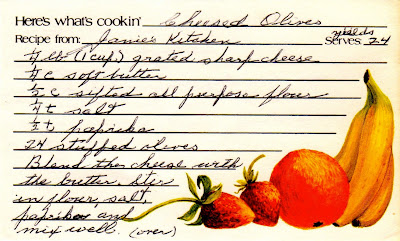 Blend the cheese with the butter. Stir in flour, salt, paprika, and mix well. Wrap 1 T. (or more) of dough around each olive to cover completely. Arrange olives on ungreased baking sheet. Refrigerate overnight. One half hour before serving, bake in a 400 degree oven for 10-15 minutes.

Serve warm (with cocktails).
Posted by Roxie Smith Lindemann at 9:19 AM

Email ThisBlogThis!Share to TwitterShare to FacebookShare to Pinterest
Labels: food, holidays, my moms