Breaking news is not usually our thing, but we know our readers our passionately interested in the situation unfolding for higher ed in California, so here are some headlines, links, pics, and a vid, which on a Thursday night when the moms have a dinner date will just have to do, my darlings. Peace out. And push back. Hard.

U of California regents approve 32% increase in student fees

Student protests continue, with die-in and building occupation at UCLA. (Get the latest news on the occupation from the UCLA Resistance blog. As always, for the most complete info on the UC crisis and the funding crisis generally, go to Chris Newfield's awesome blog.) 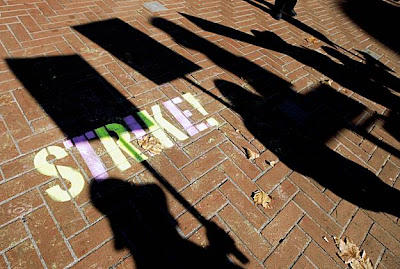 San Francisco Chronicle caption: Protesters cast shadows on the sidewalk at the entrance to the UC Berkeley campus at Bancroft and Telegraph avenues during a demonstration against proposed 32% fee hikes in Berkeley on Wednesday. Photo Credit: Paul Chinn, The Chronicle. 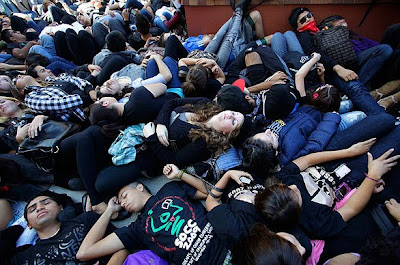 Los Angeles Times caption: UC Santa Barbara student Katelyn Paris, seen with a blue shirt in her lap, takes part in a student die-in outside UCLA's Covel Commons. The Board of Regents this afternoon approved a student fee increase of $2,500, or 32%, that will come in two steps by next fall. Photo credit: Barbara Davidson, Los Angeles Times.

Video of yesterday's protest outside the building where the regents were meeting. Fourteen students were arrested and one was reportedly tasered: