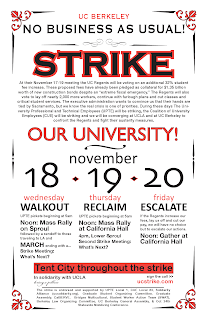 At the dawn of the new school year, this blog posed a series of questions that now seem positively prescient as a semester marked by activism and tense confrontations between administrators on the one hand and faculty, staff, and students on the other grinds toward its end. In a Labor Day post that mused on early evidence of what felt like a significant shift in higher ed, Roxie's World wondered,

Are we witnessing the beginning of a movement, the emergence of a serious challenge to the conditions of work in American higher education, or is it merely the wish for such a movement, a longing that will fade when the first set of papers comes in or, more likely, when the first set of bills comes due and faculty simply hunker down to figure out how to pay them on their reduced salaries?

Campus politics are always maddeningly local. No two institutions are alike. Each has its own quirky history and operates within a unique culture, sociopolitical climate, and economic context. Any sentence that begins, "Today's colleges and universities are . . . " will very likely end up foundering on the shoals of generalization. Nonetheless, not quite three months after we posed those questions, it seems clear that on the campuses of public institutions across the country the ground has shifted. Since the walkouts in the California system on September 24, which made brilliantly effective use of blogs, YouTube, and other tools of the Interwebs, actions have been staged elsewhere that show similar organizational fortitude and a new spirit of skepticism -- even distrust -- toward higher-level administrators.

Yesterday and today, for example, graduate employees at the University of Illinois, Urbana-Champaign went out on strike over the administration's apparent desire to give itself some wiggle room on the matter of tuition waivers for graduate students. Such waivers are a part of the students' compensation and are, of course, essential to their ability to survive and stay in school while teaching and/or researching their a$$es off for their employing institutions. (The Graduate Employees' Organization offers its rationale for the strike here.) After a day of picket lines and canceled classes, it appears the two sides have reached an agreement that secures tuition waivers, though the agreement will have to be ratified by the bargaining unit. We'll let you know if anyone from our loyal band of Illinois lurkers coughs up any fascinating or inspiring details from the soggy ground of Shampoo-Banana. Meantime, here's a report on the strike from the incredibly hip Independent Media Center of U-C.

Closer to home -- rather painfully and awkwardly closer to home, in fact -- the campus of our own Queer the Turtle U has been roiled recently by anger over the firing of the associate provost for equity and diversity and by a proposal to merge a number of diversity-focused academic programs into one unit. The firing and the merger are both being justified as cost-cutting measures, but 600 people showed up to a hastily organized protest outside the university's main administration building after word of the firing got out (in what can charitably be described as a poorly managed communications effort on the university's part). Last week, administrators faced a skeptical audience and some tough questions at a meeting of the university senate, where one longtime staff member let the higher-ups know that "trust is eroding," not so much because of budget cuts but because of problems with process and a perceived lack of inclusion. Goose, who is serving on the senate this year, grilled the provost on the merger proposal, saying that it was causing considerable distress on campus because it seemed to be motivated more by economic exigencies rather than intellectual ones. In a moment of uncharacteristic restraint, she did not use the snarky name for such diversity-dumping schemes offered up by a friend from another school that entertained the idea of putting, oh, women's studies, African American Studies, Latino/a Studies, and maybe something about Jews, Asians, and disability together: Mothers, Brothers, and Others. (Brilliant, don't you think? And you were worried about the lack of jokes in this post!)

Finally, as the image at the top of this post indicates, the California system is poised for further action over the next few days, as the UC regents meet to consider fee increases that, if approved, would mean that the cost of a UC education will have tripled since 2000. A system-wide strike of students and teachers has been called for the next three days to protest the budgetary priorities of the UC administration and to demand greater transparency and accountability. Amy Goodman has a terrific conversation with leaders of the strike on today's episode of Democracy Now! Tape and transcript available here.

Are you beginning to see the pattern here, kids? For all the local dynamics that inform and fuel any particular crisis (e.g., the California budget catastrophe, the Illinois admissions scandal), it's clear that a general chasm of mistrust has opened up between administrators and seemingly everyone else on campus. In many cases that mistrust has less to do with the failures of particular administrators than with the deepening sense among many faculty, staff, and students that a particular model of administration (call it corporate, call it neoliberal, call it No Dean Left Behind) has failed, monumentally, and has come dangerously close to destroying the institution of public higher education. Perhaps a chart can succinctly convey one possible source of what we might, without sounding overly dramatic, describe as the new crisis of mistrust on campus. The chart (picked up here) shows the increase in the number of senior managers in the University of California system relative to the increase in the number of faculty since 1997: 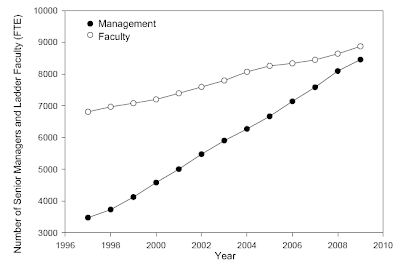 As Richard Evans, who crunched the numbers, puts it, the near-convergence of those two lines on the right side of the chart suggests that some day soon, "every faculty member [in the UC system] will have a personal senior manager" -- and what a day of rejoicing that will be, eh, kids? Think of the reports you could generate if you only had your very own manager breathing down your neck demanding some kind of accountability every moment of your professional life! We are, of course, much too lazy to try to track down comparable data for QTU or any other school, but we're willing to guess the changing ratios are fairly similar at most schools. The problem with having so many administrators running around is that they tend to do a lot of breathing down other people's necks making up administrative work to do in order to justify the exorbitant salaries they command. Such "work" takes time away from other types of work -- such as research and teaching -- that faculty value highly and that make institutions of higher learning exactly that (rather than, say, Report-Generating Machines).

Twenty or so years into this corporate model of university administration, those upon whom it has been imposed are well within their rights to demand some assessment of the assessors, a cost-benefit analysis of just how efficient the efficiency model of higher ed has proven to be. Such demands are being made by a number of individuals in a range of venues: by Judith Butler in a hard-hitting October piece in the Guardian that spoke of a "profound loss of confidence in the [UC system's] mode of governance" and in system president Mark Yudof; by professor of city and regional planning Ananya Roy in her remarks at the Berkeley teach-in on the crisis, where she asks the perfectly logical question of why, if outcomes assessment is the new regime, aren't administrators being fired for having failed to produce winning fiscal outcomes?; by UIUC's Antoinette Burton, who echoes Roy and has a few choice words about diversity in the corporatized university at a roundtable on Frank Donoghue's The Last Professors: The Corporate University and the Fate of the Humanities.

The questions are valid and, arguably, long overdue. There is relief in hearing them asked, a certain Schadenfreude in watching administrators grit their teeth and try to come up with answers. But the outcome, as it were, of this recently awakened commitment to campus-focused campus activism is by no means clear or certain. Now that the thing is going, we have to keep it stirring -- and at some point we'll need to pause to figure out just what it is we've got in this pot. Pushing back is a vital, first step. Knowing how to push forward is more vital still.

(H/T to the Shy One and Lauren Berlant for links.)
Posted by Roxie Smith Lindemann at 6:00 PM