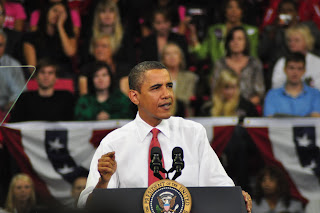 (Photo Credit: We'll tell ya later, when we've asked permission to use this image, taken by a Terp, at the Comcast Center, 9/17/09)

Extremely Brief Update on Moose on the Loose: She and her well-traveled tee-shirt made it to their undisclosed location early this afternoon and have settled in for several weeks of, you know, reading, writing, and thinking -- which is so vastly different from her usual routine that I am sure you can all understand why she had to drive 1877 miles in order to do it!

Forget about her. The big news in Roxie's World today is that Goose went to hear President Obama speak at the big rally for health care reform held at Queer the Turtle U this morning -- and has written up the adventure as her first ever guest post for Roxie's World! Fine, Moose, you go ahead and go. We can get by just fine without you -- even if you are, through the miracle of the internets, typing and editing this, with Goose's permission, to make it funnier.

Wa Po story on the president's visit is here. Photo gallery on the event is here. But who needs the Posties when we've got our own gal reporter in the house? Here without further ado is Goose's report on the President's totally Terpalicious morning! (Oh, in what follows Goose inexplicably refers to QTU by its non-blogospheric identity, but since this was a public event we'll let it go, though we vastly prefer QTU ourselves.)

Having decided that I was not going to venture onto campus today, because I knew that the President’s visit to our basketball arena to “fire up” supporters for health care reform would make traffic a nightmare, I quickly lost my resolve to work from home when I was offered a VIP pass (which meant no, or not much, standing in line and the chance to hang out with some cool administrators). So by 9:00 a.m. I was on campus and walking with my colleagues over to the Shrine for Mighty Terp Basketball (aka the Comcast Center in College Park). (Brief aside here: the Prez had to negotiate around the Washington Mystics game against Indiana this evening, being played in the Shrine, and so had a late morning rally rather than one this evening. You see, Basketball Rules in Terpland! -- but, of course, readers of Roxie's World know that!)

First thing I saw coming up to the arena was a passel of Obamaniacal volunteers, and I just grinned to myself. All were polite, clearly very excited, and had their presidential volunteer tags on. Then I saw some not-so-amusing demonstrators. Almost all were dressed as various versions of the grim reaper and were performing little skits in which they would take turns dying as the one who was dressed as Obama would select that one for the death chamber. The one chosen to die would scream and fall over, and the one chosen to live would giddily laugh and thank “Obama.” The spectacle was silly and sickening in its ignorance, but this is a free country and they weren’t hurting anyone except their uninformed selves. I was surprised that these demonstrators were all young—college age, in fact. There were also the “pro-life” anti-choice nutbars with their grotesque photos of dead fetuses, but I’m almost immune to their insults of “baby killer” by now. Oh, and there was one lone Lyndon LaRouche guy, of course.

Inside the arena, we “VIPs” were like a bunch of Keystone cops running around trying to find our designated area. The plan had changed from having us down on the floor to putting us up in some suites, and that was just fine with me. Folks on the floor looked hot and sweaty and we were comfortably sipping our water and chatting amongst ourselves as we waited for the Prez and the Maryland dignitaries—the mighty Senator Barbara Mikulski in her wheelchair (having busted her ankle back in the summer, during that weird period when every powerful woman in America seemed to be breaking something); the mighty Senator Ben Cardin; Moose & Goose’s dependable Rep. Chris Van Hollen; and the wonderful Rep. Donna Edwards. Oh, and did I mention our very cute but gutless Governor Martin O’Malley who refuses to raise taxes, refuses to explain what taxes can do for the commonwealth, and refuses to support queer households like ours in any kind of full-throated way? (Sounds like a lot of other Democrats, doesn't he?) But I digress.

A young man who was probably 8 years old or so was across the way and so cute that the jumbotron found him and focused on him dancing dancing dancing and throwing back his head to yell O-BAM-A. The air was festive, the Maryland band was its superb self, and it was a great time to catch up with colleagues outside of conference rooms, etc. We knew the main event was about to begin when we saw our (UM’s) president Dan Mote, his wife Patsy, and two of the biggest donors Maryland has known emerge from one of the tunnels. Then the Mighty Terp Marching Band, all decked out in their gorgeous caped regalia, started “Hail to the Chief” and we were OFF! I must admit that NOT wanting to burst into “Hail to the Thief” alone was very moving for me. The President came out coatless, sporting a beautiful red tie and a crisp white shirt. . .with his sleeves rolled up. He charmed the students by calling our feared turtle by his/her proper name—Testudo—and by saying he just might go rub Testudo’s nose for good luck (a student ritual during finals and other monumental occasions). I liked that he ignored the protester who was screaming his head off unintelligibly for a minute or so. I liked that he highly recommended the public option (though he didn’t insist upon it). I liked that he was funny and that he called us Terps.

What would I LOVE from President Obama? I would love for him to explain to the citizens of our country what taxes are for—health care, roads, schools, food and shelter for the poor—and not be afraid to insist that they be raised. But today it was very fine to host him at the University of Maryland and to see all of those young Terps with so much energy and enthusiasm. C’mon, Democrats—act like DEMOCRATS and stop letting the Republicans frame and control the discussion.

And, as one of my colleagues from Engineering just wrote, "Obama should hire that young adorable man" who made us laugh with his unabashed enthusiasm and joy. May he never know hope as a word only. We are what we do, and, as the President said today, channeling Ted Kennedy and Hillary Clinton (yes), affordable, excellent health care for all is a moral issue.

Thank you, Goose! Not bad for a first timer, but, yeah, you gotta work on that funny thing. Perhaps we'll bring Mark Twain in to give you some tips. In any case, it's good to know we'll have fresh content while Moose is out getting her chakras balanced or whatever the heck it is she is doing. Stay tuned, kids -- Roxie's World is open for business! Peace out.