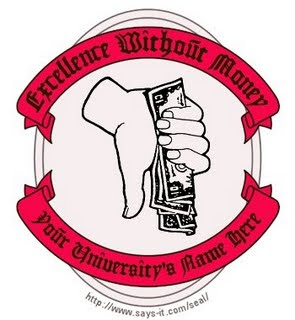 (Credit for Fake Yet Fabulous Seal: Words by Moose, image by Historiann.)

We use the occasion of Labor Day weekend to return to a meme we launched late last year as the Humongous Recession threatened to become the Second Great Depression and the first wave of furloughs hit Queer the Turtle U. (We launched the meme [and the slogan "Excellence Without Money"] here. Blog pal Historiann picked up on it in the post linked to above. We returned to it here and here.)

The school year is off to a rocky yet interesting start on college campuses this year, as public institutions come to grips with devastating cuts to budgets that were already lean due to decades of eroding levels of state support. Evidence is emerging that faculty across the country are shifting into activist mode and taking positions at odds with campus administrators who for years have engaged in a lot of public happy talk about how everything was just fine, really, despite cuts, cuts, and more cuts. You can't blame the administrators, much, for trying to protect the brand, when it was clear states weren't going to reverse the tide of declining support and public schools were desperately searching for alternative sources of revenue. You can't blame faculty either for being true to their schools and mostly acquiescing to significant changes in their work lives (larger classes, more classes, new "accountability" measures, etc.) that few truly supported and many truly, deeply, legitimately deplored. (Can you say Learning Outcomes Assessment, without barfing?) Given the incredible shrinking academic job market, most faculty felt grateful just to be employed and didn't seem much inclined to rock the boat.

Suddenly, however, an old dog with her ear to the ground begins to sense that the times may be a-changin'. The signs are everywhere:
The California situation bears watching because . . . it's California. The system is large, some of its schools are highly prestigious, and the letter announcing the walkout bears the signatures of academic superstars like Berkeley's Judith Butler and Santa Cruz's Donna Haraway. If the walkout takes hold throughout the system, it has the potential to make a big media splash and call some serious attention to the issue of funding for higher education -- though, of course, it might also result in idiotic coverage depicting faculty as selfish, out-of-touch, hippie freak tenured radicals looking for any excuse to protest instead of doing their cushy jobs.

Another reason to keep an eye on the Golden State is that faculty are using the tools of social networking to organize and publicize their efforts. The revolution, it seems, will be blogged. Remaking the University is a blog run by UC Santa Barbara's Chris Newfield. It is an indispensable resource for information on what's happening in California, but it's also got an awesome collection of links to related news from elsewhere. The Berkeley Solitary Alliance is a newly established coalition of students, faculty, and staff formed to protests the cuts and the restructuring of the UC system. Its Web site posts an open letter to students from Berkeley prof Catherine Cole that explains the rationale for the walkout in great detail. UCLA seems to be getting into the act with a new Web site called Saving UCLA that is also aimed at promoting the walkout. Facebook has been crackling this week with links about what's going on in California. Watching the whole thing unfold, one can't help but wonder:

Are we witnessing the beginning of a movement, the emergence of a serious challenge to the conditions of work in American higher education, or is it merely the wish for such a movement, a longing that will fade when the first set of papers comes in or, more likely, when the first set of bills comes due and faculty simply hunker down to figure out how to pay them on their reduced salaries?

Hard to say, but the ornery, soon-to-be-paid-less bitches of Roxie's World plan to keep an eye on the situation and do our best to keep you in the loop of the latest developments. We encourage our academic blog buds to write their own Excellence Without Money posts and to send them our way. Yes, Historiann and Clio Bluestocking, we mean you and you. You, too, Dr. Crazy, and, heck yes, you, too, Tenured Radical! Perhaps we'll get ambitious enough to do something along the lines of Historiann's most excellent Lessons for Girls series. Perhaps we'll help launch a walkout of our own as soon as QTU officially announces that faculty won't be allowed to take furlough days on teaching days, as was the case this past spring. No one made a peep then, but the situation unfolded rather quickly and took everyone more or less by surprise. That won't be the case this year.

Or perhaps we'll just post a series of recipes for elegant yet affordable meals that we'll bundle into a package called Mastering the Art of Cheap Cooking and then sit back and wait for Nora Ephron to call and offer us a movie deal. Wevs, kids, we are on the case. Stay tuned for the further adventures of Excellence Without Money. And in the meantime, enjoy your Labor Day. You've earned it.
Posted by Roxie Smith Lindemann at 1:10 PM