Sorry to be late to the party on this topic, kids, but my typist was out trying to earn her hiker badge this weekend. (Old dog yawns, rolls eyes, and mutters, "So, when does the book-writing begin, eh?") Our tardiness enables us to point you straightaway to a link to Chris Newfield's wonderful roundup of coverage of the walkouts throughout the University of California system, held last Thursday to protest massive budget cuts, furloughs, and fee increases. Chris's excellent research means that we can move immediately to the question of the hour, which, obviously, is:

Would you buy anything this guy is selling? 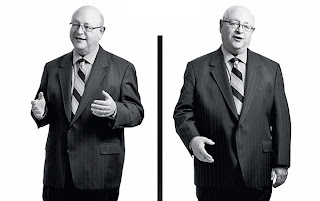 Oh, and I do have a follow-up question:

What exactly is this guy selling?

"This guy," of course, is University of California president Mark Yudof, who gave an interview to the New York Times' Deborah Solomon that was published (online) on the day of the walkouts and has had jaws dropping all over the country ever since. In the course of 15 rapid-fire exchanges, Yudof comes across as a stunningly insensitive leader whose response to every question is either a wisecrack or a callous shoulder shrug. Asked if he blames California Governor Arnold Schwarzenegger for the system's funding crisis, Yudof quickly says no. What then?

This is a long-term secular trend across the entire country. Higher education is being squeezed out. It’s systemic. We have an aging population nationally. We have a lot of concern, as we should, with health care.

Okie-dokie, sir. Not much you can do about that, I s'pose. And what does the chief pitchman for what many would consider to be the crown jewel of the nation's public higher education system think of the product he is supposed to be selling -- i.e., higher ed?

The shine is off of it. It’s really a question of being crowded out by other priorities.

Wow. Paging Don Draper. Don, we got to get our shine back! Can you help?

With friends like this, people, higher education needs no enemies. And what does Mr. Softy think about furloughs, which sparked the battle over shared governance that led to the walkouts? (Yudof overruled faculty senates on all 10 UC campuses, which had voted to allow faculty to take some portion of their 26 furlough days on instructional days to demonstrate the impact such cuts would have on every aspect of the universities' work.) Solomon describes "furloughs" as a "buzzword," to which Yudof replies:

Let me tell you why we used it. The faculty said “furlough” sounds more temporary than “salary cut,” and being president of the University of California is like being manager of a cemetery: there are many people under you, but no one is listening. I listen to them.

There are many people under you, but no one is listening -- Get it? Oh, man, this guy just kills, doesn't he?

(Click on that play button, kids. You'll be glad you did.)

I see then, Mr. Yudof. So it's burial plots and coffins you are selling for the dead enterprise of higher education. Thanks so much for explaining that! Much obliged to you, sir. These guys have a little bit of a head start on you in the coffin biz, so you might want to check them out, but I'm sure there are a couple of geniuses left at Berkeley who can help you catch up. Good luck!

Seriously, folks, we appreciate that it ain't easy being in the higher echelons of university administration these days and that the funding problem is in fact part of a much deeper political problem whose origins are way off campus. Nonetheless, it's hard to imagine a less sympathetic or effective advocate than Mark Yudof manages to be in this interview. It makes you root for the people all over California last week who were shouting, "Lay off Yudof!" Hell, it makes you root for the group, based at UC Santa Cruz, that is calling for ongoing disruptions to operations on campus in the service of launching an all-out war on the status quo. Go read this group's bracing "Communiqué from an Absent Future." Ironically, like Yudof, the communiqué's authors speak of higher ed as a dead letter office. ("Incongruous architecture, the ghosts of vanished ideals, the vista of a dead future: these are the remains of the university," states the funereal preamble to this call to arms. Go read the whole thing. It is a long but extraordinary document.)

Really, kids? Is that what it's come to? Nothing left to do but dig a hole, say a prayer, and dive into the Jell-o molds the church ladies have prepared for the wake? You know that we are committed glass half-fullers here in Roxie's World. We are not ready to declare that the ghost has been given up, and we're not sure occupying campus buildings is the way to go (though if Mark Yudof were the funeral director at our school we might be ready to take that step). For us, last week's actions in California and the signs of discontent we have sensed developing elsewhere in response to slice-and-dice budgeting in states across the country have engendered a series of questions we invite our readers to ponder:
There are a million other questions, but it's late afternoon in the East and my mountain-time typist needs to get her walk in so that she can get to today's reading. Let us know your thoughts on the crisis in higher ed. How does it feel to be, you know, dead? Peace out!
Posted by Roxie Smith Lindemann at 2:09 PM