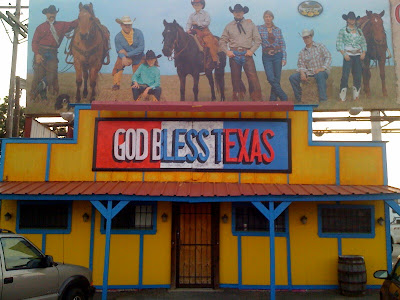 Moose, as you know, is on the loose, but we caught up with her this evening through the miracle of Roxie Cam (trademark RW Enterprises, LLC) and found her tucking into a nice filet and an ice cold bottle of Lone Star to reward herself for 544 miles on the road today, putting her just 280 easy miles short of her undisclosed destination. Livin' on the road, my friend, is gonna keep you free and clean . . . .

Day 3 finds her relaxed and happy and still sporting her 1969 tee-shirt. She hesitated about wearing it to dinner, thinking it might not go over well with the good old boys of west Texas, especially after she drove by the most spectacularly gynormous roadside cross she had ever seen on the outskirts of town. (Technically, she saw a very similar cross yesterday in Missouri, but they are tied in her mind as the most spectacularly gynormous roadside crosses ever seen.) She knew, however, that she couldn't disappoint me and my legions of loyal fans who are eagerly following the adventures of her and her provocative tee-shirt as they make their way across America, 2009. I mean, hell, she said to herself, what if Julie Powell had just decided to skip the execrable aspics in Mastering the Art of French Cooking? You don't cheat on a blog project, and you don't bail out on your readers!

She wore the shirt to the spectacularly gynormous Texas steak house down the road from the close-to-the-interstate Holiday Inn Express where she is staying. (Unsolicited commercial endorsement: Holiday Inn Express is clean, comfy, and affordable. Free breakfast and a small but well-equipped fitness room for working out those post-drive kinks.) She is pleased to report that she was exceptionally well-treated by everyone she encountered, including the trio of Texas musicians who wandered through the restaurant taking requests and chatting up the patrons. They came to Moose's table and stood right behind her, staring, she imagined, at "The Year of Gay Liberation" on the back of her shirt while doing a commendable "Orange Blossom Special" and "Rocky Top" for the couple from Tennessee seated next to her. Moose bounced her head along in time to the music as she ate her salad, being constitutionally incapable of not doing something in time to music. She wondered if they would stop and talk to her. To her delight, they did. Asked what she would like to hear, she immediately replied, "Some Bob Wills?" hoping it would up her Texas cred. "Sure!" the guitarist said, seemingly impressed. "Anything in particular?" Busted, Moose thought, unable to come up with a title. "You pick," she said, and the band launched into "Take Me Back to Tulsa." Moose sang along on the chorus, between bites of salad. When she confessed to being from Washington in the post-song chat, they jokingly asked if she was a politician. "No, no," she replied, "a teacher." (Which is really just a concise way of saying, "tenured radical and full-time lesbo indoctrinating America's children in the evils of heteropatriarchy," dontcha know.) The bass player asked what she taught. "English," she said, which usually elicits howls of, "Oh, my grammar is terrible!" Happily, though, the bass player said that he had actually minored in English and majored in journalism at the school formerly known as West Texas State. "Wonderful!" Moose replied, as the band moved on to the next table.

Newsflash: People are being nice to a middle-aged woman driving across the country in a shirt that promotes GAY LIBERATION! Does this mean:

a) that people don't read tee-shirts,
b) that people are too polite to say anything but are silently consigning her to hell,
c) that the idea of gay liberation is now wholly unremarkable, or
d) that the large group of motorcyclists in the restaurant wearing odd green caps that made Moose think they were a bunch of extremely butch leprechauns was just vastly more fascinating than one boring old broad in a shirt?

Whaddyathink, kids? We report. You decide. Peace out, and happy trails.
Posted by Roxie Smith Lindemann at 10:42 PM