(Not) Walking the Line 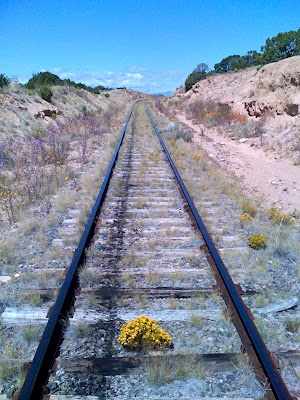 Today's High-Altitude Sabbatical Meditation,
from Moose on the Loose:
I've always walked the line, more or less, though my family might not agree that the line they put me on was supposed to end up in godless academic dyke-dom. (Oops -- Sorry, Mom!) Nonetheless, true to my German blood and my middle-class upbringing, I've been a rule-follower, a hoop-jumper, a pretty good girl -- foul mouth and penchant for sarcasm notwithstanding. Even the way I've structured this temporary escape from my ordinary (and wonderful!) life betrays a preference for order over uncertainty: I didn't just jump in the car and go. I joined AAA for the first time in my life and followed my Trip Tik as if it were the Ten Commandments. I knew exactly where I was going, and I went there, precisely as I was told to go. Precisely.

There is a powerful way in which this whole journey, this brief time that I've given myself in a world so far away and different from the one I usually inhabit is all about not walking certain kinds of lines, at least for awhile anyway. Perhaps a brief professional story will help to explain why this feels so deeply necessary to me right now.

A couple of years ago, I was on a roundtable at the MLA convention on institutionalizing LGBT and queer studies, building spaces inside the academy for fostering the study of sexual minorities and sex/gender variation. The panel was called "We're Used to It," and I positioned myself as the "battle-scarred yet stubbornly idealistic" administrator, owing to my role as director of one of the country's few free-standing programs in LGBT Studies. I was honored to appear on the panel and happy to pass along whatever words of wisdom I had picked up along the way. My stance was clear-eyed and pragmatic, as befit someone who at that point had already spent nearly 15 years helping to establish and then to run a degree-granting program in a Research 1 institution. In my remarks, I engaged with a brilliant (and not hostile) critique of the kind of work I had been doing by sociologist Rod Ferguson, who had just published a short piece in Radical History Review called "Administering Sexuality; or, The Will to Institutionality." I accepted and agreed with Ferguson's Foucauldian critique, which focused on the kinds of changes a mode of difference undergoes within administrative contexts. Among his many provocative questions was one in particular that made me squirm a little in my ergonomically correct office chair as I read it:

What contortions does sexuality, in particular, suffer while passing through institutional realms?

My position was -- and is -- that we should be mindful of the risks of institutionalization -- its tendency, for example, to neutralize what Ferguson calls the "ruptural possibilities" of sexuality and other modes of difference -- and use that awareness to try to assure that the programs we build reflect as much as possible our values, commitments, and political visions. Such programs, I insisted, are worth having as a means of assuring the survival of the queer knowledge we were all working to bring into being. I ended on an upbeat note by offering the audience a few examples of how I felt queer agency had survived and even thrived within the context of my own neoliberal, corporate, administrative university.

On the morning walks I've been taking out here in my undisclosed location, I have found myself thinking a lot about that panel, Ferguson's article, and the downside, for me, of having gotten perhaps a little too "used to it" -- and by "it" I mean an academic administrative culture that feels more and more at odds with the values and commitments that led me to choose a career in public higher education. I won't go over the litany of complaints about the funding crisis and worse than useless accountability exercises, because most readers of this blog are already painfully familiar with them. I am more interested right now in the psychic and political costs of a generation of academics having habituated themselves to this kind of work life. We've all gotten "used to" systematic incursions on our freedom as scholars and teachers, on a culture of reporting that is really a culture of surveillance. Our workloads have increased while our salaries have stagnated or declined. And now, with states all over the country refusing to raise taxes in order to preserve their already appallingly low levels of support for higher education, we are getting "used to" draconian cuts that for all intents and purposes will end public higher education in the United States. Having gotten "used to" so much that is in so many ways unbearable, what, I wonder, will we do now?

Yesterday, out on my walk, as the glorious dry desert air filled my lungs, I spontaneously said aloud (yeah, I talk to myself -- it's a lot like blogging), "I feel as if I am recovering from an illness I didn't even know I had." Perhaps the illness was simply burnout, the understandable result of having deferred my sabbatical for a little too long. Or perhaps it was the illness of having gotten"used to" things that were making my very soul sick. Perhaps it was the illness of walking too many lines that I should have crossed or blurred or forcibly erased.

In any case, here, now, today, I am working hard to get unused to conditions that ought to be acknowledged, resisted, and changed. I am not, for once in my life, walking the line -- and let me tell you, friends, it feels good.

But I still really, truly love this song, which I send out to Goose, for letting me go. Peace out, rebels.