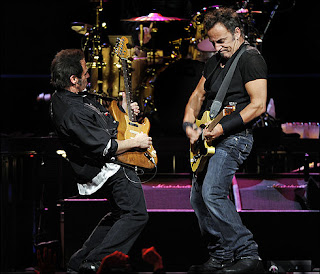 Totally crappy shot of Bruce and the Big Man, Clarence Clemons, that effectively exposes the limits of the iPhone as a camera but at least proves that the Moms were in the House: 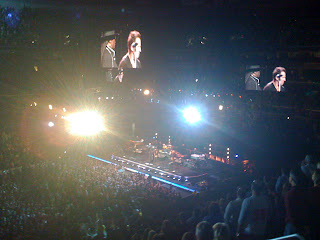 The summer revival season got underway Monday evening for the aging rockers of Roxie's World, as the faithful gathered under the big tent of the Verizon Center for three hours of movin', shakin', and mystery-ride takin' with Bruce Springsteen and the E Street Band. (Okay, technically, Goose got a head start on the season by running up to Philly on a school night a few weeks back to catch one of the Boss's two Farewell to the Spectrum performances. She has always been a slightly more fanatical worshiper than Moose is. Plus, she copes better with sleep deprivation.)

Here is J. Freedom du Lac's mostly spot-on Wa Po review of the show. Paws up to this 'graph in particular:

At 59, Springsteen remains one of the most potent live performers in popular music, largely because he's among its most committed practitioners. He drains every bit of his creative energy whenever he's onstage -- all in the service of proselytizing the power of rock-and-roll, in which his faith is unwavering.

Here is Mary Ann Akers' snarky backstage report on all the Obama insiders who were at the show, including chief of staff Rahm Emanuel. (The moms knew some big muckety mucks were around when they spotted a couple of obvious Secret Service dorks seated uncomfortably by the door of Jaleo, where they did their pre-concert tapas-loading. Oh, and they stepped into the First Church of Springsteen right behind North Dakota Senator Byron Dorgan, who was all by himself and looked, um, extremely senatorial as he made his way into the sanctuary. [Yes, you know you've been observing the DC political scene a little too closely when you recogize the senators from obscure states you have never visited when you bump into them in public.])

Our thoughts on the show?

Paws up to the interactive new schtick in which the Boss takes audience requests from people holding up signs in the first few rows. It's goofy, but it works. And who ever thought we'd hear Bruce and company crank up "Hava Nagila?"

Paws up to whoever figured out that Jumbotrons can do more than let the folks in the cheap seats have some vague sense of what the tiny little dots on stage are doing. We don't know how other artists are using them, but with Springsteen you get televisuals that feel as tight and polished as a concert video. It's a smart way to appeal to 21st-century eyeballs. It also gives audiences a chance to judge such things as the on-stage intimacy between Mr. and Mrs. Springsteen, as the couple weathers the storm of his having been named as a party to adultery in a New Jersey divorce case. (All right, we will gratify your prurient curiosity: From where the moms sat, it appeared that Patti Scialfa spent a lot of stage time with Steve Van Zandt, cozying up to her hubby of 17 years only for their duet on "Kingdom of Days." They detected a slight chill in the marital air, but, hey, the original red-headed woman is still the one who gets to strut her stuff with the boys in the band.)

Paws down to the turn toward pop Bruce has taken in recent years. It pains us to report this, but the moms now openly mock songs like "Working on a Dream" and "Waitin' on a Sunny Day" when the band starts to play them. They do this by pretending to skate right there in the stands, because the schmaltzy melodies and rhythms of these songs remind them of the roller rinks of their misspent youths, even though, technically, Moose probably only went to a roller rink twice in her life. Please, Bruce, you were born to rock and roll. It's a little late to start chewing bubble gum. We also continue to think you need a serious infusion of inspiration when it comes to your lyrics. The creative division of Roxie's World is going to demand that you stop writing songs if you tarnish your legacy by continuing to produce embarrassments along the lines of "Outlaw Pete." Can we hear you? Uh, yeah, but sometimes we'd rather not.

On the other hand, we'll end with an enthusiastic paws up for the durability and the glory of the masterworks of the Springsteen canon, those songs that, no matter how many times we hear them and share in the magic of their public performances, move us, amaze us, and take us outside of ourselves to a space of collective dreaming and desiring and world re-making. We'll forgive you "The Rising," which feels forced and derivative, as long as you keep "The Promised Land" in the setlist and treat us to an occasional "Rosalita." Give us your best poetry, Boss, and we shall endeavor to endure your pop. I guess that's what you once memorably referred to as "the price you pay." We'll pay it, gladly, for all the righteous good fun we've had thundering down the road with you over the years. You keep strumming, and we'll keep coming. That's a promise that won't ever get broken.
Posted by Roxie Smith Lindemann at 9:51 AM