Keep hop alive, beloveds. It's spring, even if it is a chilly gray day before Easter in your nation's capital. Whatever rite of spring you celebrate -- resurrection, liberation, 100% secular chocolate bunnies -- your pals in Roxie's World wish you greener grass and rising energy as the sun makes happy the skies of the northern hemisphere (to paraphrase Blake). 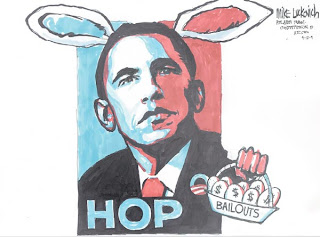 We've gathered a few treats for your Easter or non-Easter baskets, and we promise the treats are 100% porn-free. That's right, kids -- no Pirates jokes, no bawdy readings of Emily Dickinson, no lurid suggestions about how QTU administrators comport themselves at cabinet meetings. Today we leave cheesy hetero-porn behind and return to regular blogalicious programming and our usual stance of 100% homo-respectability. Until circumstances or whim force us to go all crude again in a pathetic effort to drive up hits by sprinkling words like pornography and golden showers throughout our posts.

Anyway, back to your treats.

Scrumptious as a Chocolate Bunny, With Far Fewer Calories: Because we love you, we tracked down the vid of Rachel Maddow's piece from Thursday night's show on the ridiculous new anti-same sex marriage commercial put out by a group calling itself the National Organization for Marriage. Butch PhD shows excerpts from the Night of the Living Dead-style commercial along with what are purported to be clips from auditions for the commercial somehow obtained by HRC. One of the hapless actors refers to "a rainbow collision of people" joining forces to stop the spooky scary sinful spread of same-sex marriage. We have no idea if the clips are actual auditions, but it's just too hilarious not to share. The stuff on the commercial starts at the 2:30 mark:

Things Go Better With Marshmallows: Wa Po has the results of its third annual Peeps Diorama Contest. We are crushed that the brilliantly talented blogger/peeps artist Clio Bluestocking didn't win for her inspiring National Museum of the American Peep, but there's still plenty of gooey and impressive stuff to look at in the Post's gallery of the forty finalists. Candy Man, because he knows us so very well, directed our attention to #25, "Peeps on the Run," a sugary homage to Thelma and Louise. Note to self: Don't let Moose get anywhere near the marshmallow aisle at the supermarket. If she starts peeping, she'll never type for me again.

Take That, Bi-Coastally Arrogant Dipsticks: Here's the piece Moose would have had us do this week if we hadn't gotten kidnapped by Pirates II. We are grateful to Chicago Tribune reporter Rex W. Huppke for explaining to residents of states that don't begin with an "I" that the Iowa Supreme Court's same-sex marriage decision was not some kind of freakish judicial accident that should be provoking an epidemic of raised eyebrows throughout the land. It was, in fact, perfectly in keeping with a long-established tradition of legal and political progressivism in Iowa and other parts of the Midwest that is misunderstood or generally ignored by those from outside the region. Historian Linda Kerber, who teaches at the University of Iowa, explains that tradition and gets off a couple of nice lines about the provincialism of New Yorkers who act like they need a passport to get across the Hudson River. Touché, says the French-speaking Official Midwesterner of Roxie's World.

Survival of the Nice Guys: We've had this Scientific American article taking up a tab in our browser so long that we'll have to get a crowbar to pry it out, but we pass it along today because the various holidays of spring seem like a good time to reflect upon the evolutionary benefits of kindness. It's an interview with Dacher Keltner, director of the Berkeley Social Interaction Laboratory, and author of a book called Born to be Good: The Science of a Meaningful Life. We insist that you go read it, because it will make you feel good about your own basic inclination to be a nice, altruistic person. Of course, Moose's favorite nugget from the interview is a discussion of an article Keltner recently published titled "In Defense of Teasing." Listen to what Keltner has to say about one of my typist's favorite hobbies (emphasis ours):

Teasing is the art of playful provocation, of using our playful voices and bodies to provoke others to avoid inappropriate behaviors. Marc Bekoff, a biologist at the University of Colorado, Boulder, has found in remarkable work with coyotes that they sort out leaders from aggressive types in their rough-and-tumble biting. The coyotes that bite too hard in such provocative play are relegated to low status positions. We likewise accomplish so much with the right kind of teasing.

Teasing (in the right way, which is what most people do) offers so much. It is a way to play and express affection. It is a way of negotiating conflicts at work and in the family. Teasing exchanges teach children how to use their voices in innumerable ways—such an important medium of communication. In teasing, children learn boundaries between harm and play. And children learn empathy in teasing, and how to appreciate others’ feelings (for example, in going too far). And in teasing we have fun. All of this benefit is accomplished in this remarkable modality of play.

The art of playful provocation -- Hmmm, almost sounds like a blog name, doesn't it? Have fun, darlings, and remember not to bite too hard. Peace out.
Posted by Roxie Smith Lindemann at 3:24 PM