Sorry for the light posting, kids. We are in rest and catch up mode, following the hugely successful Homopalooza held over at Queer the Turtle U this past weekend. The papers were top-notch, the discussions lively, the weather glorious, and the artichoke dip sublime. Both moms felt it was poignant and powerful to be gathered with a group of queer studies scholars just a few days after the death of one of the field's founding figures, Eve Kosofsky Sedgwick. For some in attendance, Sedgwick's passing was a devastating and deeply personal loss. For others, it was less personal but nonetheless profound. In some ways, the conference felt like the first tentative steps, on a local level, toward the fulfillment of a wish Sedgwick herself expressed in 1993, apropos of her use of the first-person singular:

"I have an intense wish to be assured that the people and communities I'm leaving behind can take care of themselves -- that they don't need 'me,' my thought, my labor of regenerating a first person to keep them going." 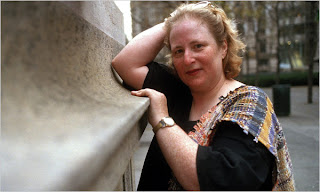 Meanwhile, the tributes and stock-takings continue to roll in.
That's all for now, kids. My typist has to get ready to teach tomorrow. (Insert eye-rolling icon here.) Peace out.
Posted by Roxie Smith Lindemann at 7:54 PM