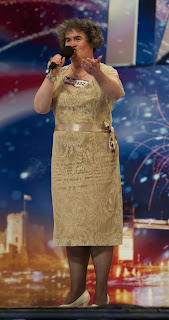 My typist insists she is the Busiest Woman in (Anti-)Christendom this week, getting ready for the second annual Homopalooza being staged over at Queer the Turtle U on Friday and Saturday. (Local readers: Be there or be square. Attendance will be taken!) You know how nutty she gets when she's puttin' on a show, as she and her loyal sidekick qta put it, so we've decided to reduce some of the blogospheric pressure on her by designing a task our readers can work on together -- You know, just like teachers sometimes do when they don't have quite enough of a lesson plan to fill an entire class.

Here is your assignment. Run over to CBS News and watch this Mark Phillips story on Susan Boyle, the 47-year-old Scottish woman who wowed judges earlier this week on a show called Britain's Got Talent, which, we guess, is catchier sounding than Britain Used to Have an Empire But Now Just Has Cheesy TV Shows, but just barely. (Sorry to take you off-blog, but the vid is not embeddable.) Study it carefully. Take notes. Then come back here and identify five eye-poppingly revolting assumptions about women that figure into the story. (I know it will be hard, but limit yourself to five, please. You won't get extra credit for doing more than the assigned number.) Then, working in consultation with your peers in the class -- er, comments -- try to explain to us why people are always saying, "It ain't over till the fat lady sings," when it's perfectly clear that nobody actually believes that a woman of a certain size has the competence to perform on stage and really shouldn't be seen in public anyway unless she just enjoys being ridiculed for being fat and ugly and sexually unattractive, according to the sex and gender norms of heteropatriarchy.

Need some help on the assignment? Pretend you are Melissa McEwan off on one of her righteous rants about woman-hating and fat-hating. Better yet, pretend you are the recently deceased Eve Kosofsky Sedgwick, who is much on our hearts and minds right now and who, among her many other accomplishments, helped open the door to fat acceptance through works like this and this. Eve's gone, but her work goes on. Do it, beloveds.

Then run over to the YouTubes and watch the whole 7 minutes of Susan Boyle's appearance on Britain's Got Talent. Judge Simon Cowell will likely make you want to retch, but at least he isn't pretending to be a journalist. And Susan? Girl's got some pipes. Sing it, sister!

Your assignments are due on Sunday. Good luck!

[H/T to Hollis, who passed the CBS story along via Facebook.]
Posted by Roxie Smith Lindemann at 11:24 PM