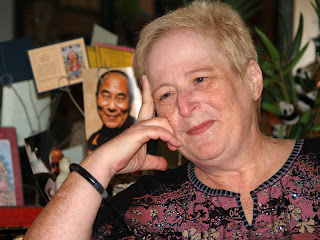 Roxie's World notes with sorrow the passing of Eve Kosofsky Sedgwick, critic, theorist, poet, and English prof whose transformative readings of same-sex eroticism in the canonical texts of Western fiction laid the groundwork for the broad, deep, and radical project of humanistic inquiry that came to be known as queer theory. Sedgwick died late last night in New York after a long battle with breast cancer. She was 58 years old. (Wikipedia bio is here.)

The English profs of Roxie's World knew Sedgwick from a distance, yet feel a profound gratitude for all that her generosity and perspicacity made possible. Goose first met Sedgwick in the mid-80s when she was a candidate for a position at Amherst College, where Sedgwick then taught. In the chilly winter of 1986, Goose was a freshly minted PhD and Between Men was just starting to shake up the discipline. What she recalls from that first encounter is that Sedgwick went out of her way to spend time with her and encouraged her to get to know a certain whiz-kid from the Hist Con program at Santa Cruz who was a candidate for the same position. As it turned out, both Goose and that whiz-kid, better known in these precincts as my Aunt Katie, ended up taking jobs at Queer the Turtle U and have been close friends and constant interlocutors for more than twenty years. Goose has always been grateful to Sedgwick for helping her learn early in her career that friendship and intellectual collaboration beat rivalry hands down.

Moose has no heart-warming personal story involving Sedgwick, but she has always felt inspired and emboldened by the stylistic audacity of Sedgwick's prose. By 1999, when Moose was publishing the all-important tenure book, she could feel reasonably confident that putting the word "queering" in the title would not sink her chances of lifetime job security in large part because Sedgwick had helped to put the word at the center of the discipline. Moose also knows there would be no LGBT Studies Program to direct if it hadn't been for the paradigm-shifting work of Sedgwick and others in the 1990s. As she noted in a message announcing Sedgwick's death to a queer studies listserv she manages, even those of us who didn't know her personally "benefited tangibly and intangibly from all Eve helped to make possible in humanities scholarship on sexuality and gender, from all she helped us to see, know, and express. It is almost impossible to imagine the incredibly rich, varied field we have today without Eve's brilliant work and her brave example."

Here are some early tributes to a kind, brilliant force gone much too soon:

Judith Butler, another major force in queer theory, comments on the importance of Sedgwick's work and its interactions with her own.

Richard Kim pays tribute to and begins to assess the impact of her work.

Macy Halford notes that Sedgwick's visibility in the 90s placed her at the forefront of the culture wars, often resulting in crude caricatures of what she said and how she said it: "[C]riticism of her work seldom did justice to the subtlety and searing wit of her writing, nor to her sensitivity to the social and sexual bonds that tie us to each other and to the world."

The moms had a strange and moving experience of Sedgwick's dying in the form of a virtual vigil that took place in the last ten days or so as colleagues, friends, and students shared news and feelings on Facebook. It seemed fitting that a scholar who had written so eloquently of affect, attachment, distance, and intimacy should, as she slipped away, become the occasion for and the focus of so much deep feeling, so many expressions of love, gratitude, sadness, and consolation being sent out in the aching, overflowing void of cyberspace. When news of Sedgwick's death showed up on Facebook this morning, Goose posted a line from Dickinson on the death of her mother that seemed, somehow, to capture the collective sense of loss as well as the powerful intimacy and evanescence of having shared the experience through the tools of social networking:

She slipped from our fingers like a flake gathered by the wind, and is now part of the drift called "the infinite."

We sat at our keyboards, typing her name again and again and sending it out into the winds of cyberspace. She slipped from our fingers, and we use those same fingers to call her back, to reach her, to touch her, to touch our feelings of her. For now, it is all we can do.