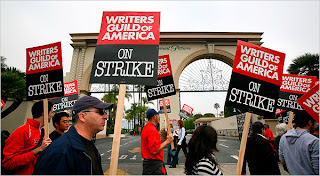 Moose is still refusing to type for Roxie’s World.

“What’s the point?” she asks mournfully. “It’s all over, isn’t it? I mean, Bill Clinton got the knickers of the punditocracy in a wad by pointing out that the significance of Obama’s opposition to the war in Iraq (while a state senator from Illinois) has been greatly exaggerated. Suddenly, the republic is on the brink of collapse because of an alleged violation of the rules on how former presidents are supposed to behave when their spouses are running for the highest office in the land, rules which somehow exist despite the fact that the founders of said land denied the rights of voting and running for office to their spouses and, oh yeah, the black folks they owned at the time.”

“Moose, that’s just the hormones talking. Don’t give up hope! Clinton still leads in the delegate count, and she’s not doing badly in the Kennedy count either. Yes, Caroline and Ted have thrown their support to Obama, but Clinton’s got Kathleen, Kerry, and RFK, Jr. That’s nothing to sneeze at!”

“Rox, please, don’t be naïve. Ted Kennedy steps into a highly contested primary race to endorse one senator with less seniority over another. It’s a big deal, dammit! It’s a huge deal! Why is that not a catastrophic breach of political decorum? Why are the bloviators not howling about how this will divide the Democratic party and destroy the unity essential to victory in November? Why do the Clintons always get blamed for this sort of crap?”

“Right, but Toni Morrison also endorsed Obama today with some airy tribute to his supposed ‘wisdom.’ ‘It is too bad if we associate [wisdom] only with gray hair and old age. Or if we call searing vision naivete. Or if we believe cunning is insight.’ My god, I could puke! A Nobel Prize winning writer whom I revere above almost any other living being implying that another woman is ‘cunning’ and holding forth as though ‘wisdom’ had any meaning or worth apart from action, apart from the hard work of living, breathing, and choosing in the world every godforsaken day of our pathetic little lives.”

“Moose, take a breath, seriously. I think the basketball has got you down.”

“No, Rox, my species has got me down, my party has got me down, and my country makes me insane. What was so awful about Hillary Clinton’s obviously (historically) accurate claim that President Johnson’s leadership was essential to the success of the struggle for civil rights for African Americans? Bill Moyers, who worked in the Johnson White House, certainly thought it was a fair point to make. And Obama’s remarks about Reagan were full of code words like ‘the excesses of 1960s and 1970s’ that were clearly aimed at assuring Republicans and independents that he was no liberal. Clinton’s response was well within bounds of fair political critique, but people fall all over themselves to denounce it as a Lee Atwater-scale attack on a fellow Democrat. Why, on the other hand, was it apparently quite acceptable to the Emily Posts of the punditocracy for Obama strategist David Axelrod to insinuate that Clinton’s vote to authorize military action in Iraq implicated her in the assassination of Benazir Bhutto? Where was the outrage on that? Where were the cries of, ‘Over the line! Off the deep end! Divider! Meanie!’”

“Perhaps there is a bit of a double standard in play here. A lot of people do really seem to hate the Clintons, you know. Still, Moose, you’ve got to call off this strike. I need you to type for me again. My readers are starving. You’ve got another speaking gig coming up next week, and we’ve got a lot of new readers coming in to see what Roxie’s World is all about. We can’t let them down. They need us! The guys in Clicks and Eyeballs are screaming for fresh content and hot links.”

“Well, maybe if you’d let me do that funny bit I was thinking about the other day – You know, ‘A President Like My Father.’”

“Oh, yeah, the funny one where you propose that what America needs is a mild-mannered Republican accountant with a secret gift for filthy song parodies and a bizarre obsession with The Sound of Music?”

“Yeah, that’s the one – about the candidate who makes Ted Kennedy reconsider his support for Obama with a hearty, ‘Hey, why not?’”

“Great idea, Moose. Grab the laptop and plop right down in the red chair. It’s time to get back to work!”

“Okay, but only if you promise I get to help write the Academy Awards post.”

“Sorry, but we'll leave that to the crack team of homosexual film critics over at Mod Fab and QTA. Anybody can write about politics, but it takes a real expert to decide who will end up with those gaudy gold statues.”