Technically speaking, we don't have time to post today on account of June Star is at this very moment screaming down I-95 to see us and we're all excited about that, but here's the thing: Today is Blog for Choice Day, and the Academy Award nominations came out this morning and Juno got a Best Picture nom. We're good with that here in Roxie's World, because Juno is the only movie the moms saw during the January break film fest that didn't make them want to run screaming from the theater to find another species to join. It was heart-warming in a good way and filled with winning performances and some of the best darn writing we've seen outside the collected works of Jane Austen and Virginia Woolf. By all means, yes, kids, let's jump right up on the Diablo Cody bandwagon.

They loved the film, but they found its ambivalent position on reproductive choice troubling, as did The Nation's Katha Pollitt. That moment when Juno pauses because the anti-choice protester outside the abortion clinic claims the fetus she is carrying has fingernails struck the moms as the movie's one false note, but it is a profoundly significant note. Why does such a smart, independent young woman fall for the sentimental and duplicitous ploy that the fetus is from the moment of its conception a person? Even if we grant the film its premise -- i.e., that Juno will carry the child to term and give it up for adoption -- this moment goes further than it needed to in order to justify Juno's choice. In acquiescing to the personhood of the fetus, Juno and the film demonize the option of abortion, which means her choice is really no choice at all. She couldn't remain the good and appealing young woman she is and choose to terminate her pregnancy once she has accepted this view of it. Her hands are tied by an ideological framework of squeamishness toward abortion.

Which is why a quick little post on Juno is a good way to honor Blog for Choice Day. The film reminds us that the right women gained 35 years ago today is precarious at best. There are no easy answers, but we must demand clear positions from candidates on the issue of reproductive freedom. We must keep the issue on the political radar screen, because its place on the cultural radar screen is hazy at best.

On the upside, nice Post article today on how increasing availability of RU-486 is "transform[ing] the experience of ending a pregnancy in the United States." Ya gotta wonder why the shrewd Juno didn't explore that option before her fetus got to the fingernails stage. 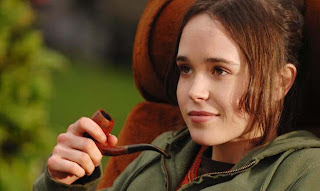