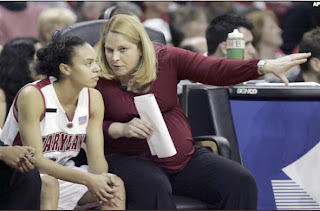 We pause in the midst of our political obsessing to note that the 4th-ranked Lady Terrapins of the University of Maryland defeated the evil Blue Devils of Duke University in College Park for the first time since 1998 on Monday evening. They were led by inspired play from our beloved Marissa "Shoulders" Coleman, who scored 30 points and looked like she would spit bullets when the feisty Devils tied the game with 7 minutes left to go. Photo above shows pregnant-with-twins Coach Brenda Frese having a heart-to-heart with point guard Kristi Toliver, who had a bit of turnover trouble in the game.

The moms were thrilled because their very fetching "Fear the Brenda" and "Terp Women Rule" signs were shown on the jumbo-tron an amazing three times! They stand ready to help deliver Coach B's babies themselves should it prove necessary in the next month or so.

Wa Po story on Toliver's evolution as a point guard is here.

Sports Illustrated story on Coach B. having to watch road games at home now that her doctor has advised against travel is here.

Memo to new Duke Coach Joanne McCallie: Sorry for the rude welcome to "Hell in a Shell," but that's life in the ACC, baby. You're still the best dressed coach in college women's basketball, and we look forward to whipping your teams for decades to come.

*House Rule #1 in Roxie's World: We hate Duke so much that if Duke were playing the Taliban, we'd root for the Taliban. Therefore, any team playing Duke is called the Taliban, and we sit on the couch or in the stands shouting, "Go, Taliban, go!"
Posted by Roxie Smith Lindemann at 12:32 AM