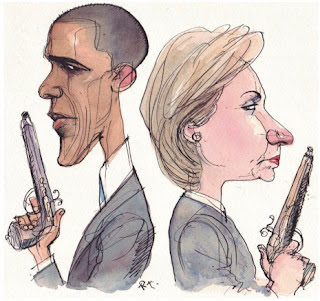 What’s wrong with this picture? Oh, you know, everything.

The good news is that the Clinton and Obama campaigns have declared a “truce” in a war of words about race that was threatening to overwhelm the truly great news of this election season. Let’s not forget that, kids: Democrats are awash in qualified, appealing, history-making candidates for president, while Republicans are riding a swift boat to election hell being co-captained by a flat-earther, a Mormon, and a guy wound so tight he can make a victory speech look like a prayer for a bowel movement. Don’t ask, but some denizens of Roxie’s World are pretty familiar with what such prayers look like.

By the way, did y’all hear that poor little Maureen Dowd went off on Shrub’s big trip to Six Flags Over the Mess We Made of the Middle East and got so damn sick she had to get treated by the president’s very own personal physician? Wa Po’s Reliable Source reports that MoDo was too sick to write her column for Sunday’s Times. Question for the ethicists of Roxie’s World: Are we evil for thinking that’s a good thing?

Anyway, back to the Showdown at Race/Gender Gap. We’re a little late getting to this story, which has been the talk of the blogosphere and the mainstream media for the past several days, so we won’t bore you with a bunch of links to stories you’ve already read or a bunch of speculation about who started the “war” and who benefits from it and who is harmed by it and whether the Dems’ propensity to get mired in identity politics is the one way to guarantee that the dude with the impacted bowel moves into the White House come January 2009.

No, what we want to talk about is the way we talk – or don’t talk – about race and gender in American politics. The metaphors we habitually see in the media – of wars and truces, games and cards, showdowns and smackdowns – are an indication of how, um, impacted our discourse on these subjects is. The images are all violent and adversarial, drawn from an economy of scarcity yet framed in individual rather than structural terms. The New Yorker cartoon is depressingly familiar in depicting members of two different groups historically lacking in power faced off against one another rather than joining forces to demand a redistribution of power from those who have historically hoarded it. The cartoon figures eye one another warily, as they must, because neither is prepared for that deeper struggle, which would not be a “war” but an even more fundamental re-imagining and re-structuring of social and economic relations. And we sure don’t want to go there, do we?

What became painfully clear in the whole “Who’s playing the race card?” imbroglio is that both Clinton and Obama are trying to run as white men. Pushed to the wall after her loss in Iowa, Clinton, one might argue, reluctantly played the gender card by publicly choking up and showing herself to be “just one of the girls” in an effort to appeal to women voters in New Hampshire. Obama, taken aback by his loss in New Hampshire, went ballistic on Clinton’s fairly banal suggestion that Martin Luther King had a healthy respect for the role politicians had to play in effecting social change in an effort to appeal to African-American voters in the upcoming South Carolina primary. Each selectively and ambivalently embraces her/his status as the first serious female/black contender for the presidency, preferring instead to fall back on a comforting language of competence or transcendence as a way of reassuring voters that this “change” election won’t really change much at all. Vote for me – I won’t set you free, but I’ll make you feel good, and that’s what counts.

We founder when we collectively stumble into the abyss of race or gender because we have no honest way of discussing the deep, material yet informal inequalities that remain when legal impediments to equality have been largely eliminated. (Bob Herbert’s column on misogyny this week was an encouraging example of the kind of conversation we need to be having, as was Pam Spaulding’s comment on our inability to speak frankly about race.) We grow impatient and pretend that the work is done because we seem unable to figure out how to do the work that so clearly needs doing. Would a president Clinton or Obama move the nation toward a way of taking on those difficult, necessary tasks? Hard to say, but it’ll never happen if they don’t put the guns down, turn around, and look each other straight in the eye.
Posted by Roxie Smith Lindemann at 12:14 AM