After a long, difficult week in politics, a week in which loyalties were tested, old wounds re-opened, and certainties upended, Americans today stand united around a common purpose and a single clear idea: NBC's Chris Matthews is a complete idiot, a buffoon so bereft of insight and lacking in decency that it's hard to fathom how he got a driver's license much less a couple of television shows. There is even a new blog devoted entirely to "exposing the wankery, the douchebaggery, the fecal stainery, and the general foul pusbag that is MSNBC's Chris Matthews." It's called Sweet Jesus I Hate Chris Matthews (and, yes, it acknowledges its debt to one of the original deconstruction-of-media-moron sites, Sweet Jesus I Hate Bill O'Reilly).

There is also this delightful Scott Bateman cartoon, which takes up Matthews's mind-boggling assertion earlier this week that Hillary Clinton would not be in the United States senate or a front-runner for the Democratic presidential nomination were it not for the fact that "her husband messed around":

Then, because an issue is not really an issue until Jon Stewart has weighed in on it, there is this long bit from The Daily Show on how the pundits got everything wrong in New Hampshire. His comments about Matthews are about 5 minutes into the clip (though the whole thing, of course, is worth watching):

So, you see, fellow citizens, we have found the true uniter! We have found one thing on which we can all agree. Please, Clintonistas and Obamaniacs, and, yes, even you dead-ender Edwardians, let us join hands and give thanks to the gods of media consolidation who have given us so very many opportunities to see and hear and loathe Chris Matthews as we slog through the tortuous process of choosing our next president. Chris reminds us that no matter how vague and insubstantial political campaigns are, there is nothing more vapid than the coverage of those campaigns. No matter how trivial or mean-spirited one campaign's attacks may be upon another, the blabbing, blithering bloviators will always win the contest to see who is most superficial or gratuitously cruel. In a nation of swift boaters, their profit-seeking boats are the biggest and swiftest of all. Mo Do's pathetic little newspaper column is nothing compared to the platforms Chris has for spewing his venomous Hillary hatred. Thanks, NBC, for reminding us of what binds us together in these moments when intra-party divisions threaten to tear us apart.

So, now that we all feel warm and happy and united again, Roxie's World has some homework for y'all to do. 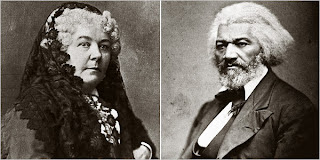