Death of a Shero 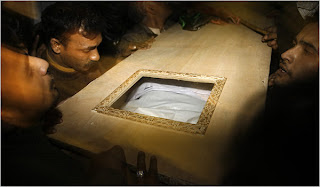 Tragically, my friends, the Benazir Bhutto death watch, begun in Roxie's World when the former prime minister returned to her country in October despite threats to her life, ended Thursday with Bhutto's assassination in Pakistan. We mourn the loss of this brave woman and deplore the misguided policies of the United States that contributed so much to the instability in Pakistan. (For our previous commentary on Bhutto, click here, here, and here.)

NYT obit is here. Times slideshow of highlights of her life is here. Coverage of the assassination is here. And here is Bhutto in her own words, blogging this fall on Huff Po about her risky decision to return to Pakistan. Here is some of what she had to say then:

I long ago realized that my personal life was to be subjugated to my political responsibilities. When my democratically elected father, Prime Minister Zulfiqar Ali Bhutto was arrested in 1977 and subsequently murdered, the mantle of leadership of the Pakistan Peoples Party, our nation's largest, nationwide grassroots political structure, was suddenly thrust upon me. It was not the life I planned, but it is the life I have. My husband and children accept and understand that my political responsibilities to the people of Pakistan come first, as painful as that personally is to all of us. I would like to be planning my son's move to his first year at college later this month, but instead I am planning my return to Pakistan and my party's parliamentary election campaign.

I didn't choose this life. It chose me.

Words fail us. Pray for peace, beloveds. And work like hell to make it happen.
Posted by Roxie Smith Lindemann at 12:28 AM