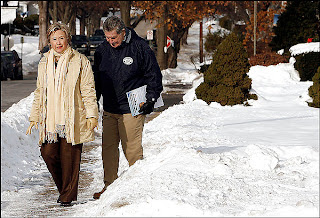 Acknowledging the strength of the Democratic field and the enormous potential of chief rival Senator Barack Obama, the editorial board of the Des Moines Register today endorsed Senator Hillary Rodham Clinton in terms that should thrill her campaign and may persuade a few hearty voters to lace up their ice skates and turn out for her on caucus night. Here is some of what the influential paper had to say:

The choice, then, comes down to preparedness: Who is best prepared to confront the enormous challenges the nation faces — from ending the Iraq war to shoring up America’s middle class to confronting global climate change?

The job requires a president who not only understands the changes needed to move the country forward but also possesses the discipline and skill to navigate the reality of the resistant Washington power structure to get things done.

From working for children’s rights as a young lawyer, to meeting with leaders around the world as first lady, to emerging as an effective legislator in her service as a senator, every stage of her life has prepared her for the presidency.

The endorsement goes on to map out the professional and life experiences that have prepared her for the presidency and to praise Clinton for her toughness and her ability to learn from her mistakes. "Tested by rough politics and personal trials, she’s demonstrated strength, resolve and resilience," it admiringly notes. The endorsement acknowledges that some voters have found Clinton less inspiring than Obama and admits that he more than she inspired the board's imaginations. "But it was Clinton," the editorial concludes, "who inspired our confidence. Each time we met, she impressed us with her knowledge and her competence."

The times demand results. We believe as president she’ll do what she’s always done in her life: Throw herself into the job and work hard. We believe Hillary Rodham Clinton can do great things for our country.

The board's framing of its choice between a leader who inspires the imagination and a leader who inspires confidence reminds me in some ways of the choice my moms faced a few years back when they were picking an architect to re-design our house. After careful research and several months of dithering, they had narrowed the field down to two talented yet totally different guys. The first guy was a fancy fellow whose name you might recognize who came to their first meeting with his latest coffee-table book and seemed ready to start tearing down walls before he had even said hello. "If you want to make an omelet, you gotta break some eggs," he declared to a quizzical Moose. He took phone calls in the middle of the meeting but enchanted the moms with fantastic visions of the postmodern wonder he could make out of our humble little red brick cape cod. The other guy, by contrast, rode up to our house on his bicycle, came in, and sat quietly at the dining room table while the moms struggled to put their dreams for the house into words. He listened intently, asked numerous questions, and nodded thoughtfully as Moose stumbled from one architectural tag cloud to another: "Um, you know, arts and crafts, um, Frank Lloyd Wright, um, Sarah Susanka. Eclectic, really. We're pretty eclectic."

As they wrestled with the final decision, the moms went to a party and Moose found herself explaining their dilemma this way: "Coffee-table book guy, well, he's like poetry, you know, and bicycle guy is like prose. Coffee-table book guy sweeps you off your feet, makes you feel all tingly and nuts, but bicycle guy is the one you end up marrying. For something like this, though, shouldn't we go with poetry rather than prose?" A wise friend with a knack for cutting to the chase looked Moose right in the eye and said simply, "Prose doesn't have to be boring." Moose looked back at her in amazement and suddenly recalled that she had devoted much of her career to the study of prose she found to be anything but boring. Indeed, she uses words like "luminous," "soaring," "gorgeous," and "delicious" to describe the prose she likes best. She reads it aloud to her students and goes weak in the knees at a particularly fine turn of phrase or a metaphor that surprises and delights.

Long story short, the moms hired bicycle guy and worked with him for a year and a half in a satisfying creative and professional partnership that resulted in their vague dreams being beautifully realized. They wake up every morning in a house that shelters their bodies and feeds their souls. One of the best decisions they ever made was to go with the low-key guy who inspired confidence, listened closely, and worked tirelessly with and for them to achieve the desired results.

As it is in the building of houses, so may it be in the leading of a nation. Who is best equipped not only to make us dream but to do the hard work of making dreams real? Is it the guy whose every word is a poem or the prosy woman who has never walked away from a fight -- for kids, for health care, for her marriage, for accountability in government? In 18 days, voters will finally start weighing in on that decision. Roxie's World gives a PAWS UP to the Des Moines Register for effectively framing the choice and for coming down on what we see as the best side. Fasten your seat belts, though, kids. Democracy's a-comin'!
Posted by Roxie Smith Lindemann at 1:38 PM