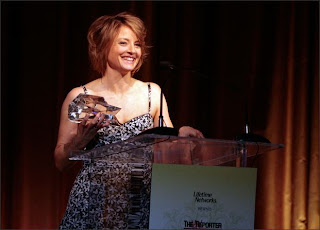 Hot News from the Tinsel Town office of Roxie's World (with a big PAWS UP to qta for calling this to our attention): Has actress Jodie Foster decided it's time to open up the door of her crystal closet? Has the two-time Academy Award winner been lurking in Roxie's World and taken to heart our open letter urging her to stop being so darn coy about her sexuality? Could be, kids, it just could be!

The Scoop: Foster accepted the Sherry Lansing Leadership Award on Tuesday at the 16th annual Women in Entertainment Breakfast. (I bet the men get dinners, don't you? With, like, hot hors d'oeuvres and cocktails and everything? Did the women even get valet parking?) (Greg Hernandez's LA Daily News report on the event is here. Many photos of the event are here. Film clip here.) Foster gave a sweet if hard to believe acceptance speech in which she professed to be clueless and weak:

I don't feel very powerful. I feel fragile . . . unsure, struggling to figure it all out, trying to get there even though I'm not sure where there is . . . I've been working in this business for 42 years and there's no way you can do that and not be as nutty as a fruitcake.

"Oh, yeah," Moose muttered from the couch when she read that. "I'm full of self-doubt, too, sweetheart, and I don't rake in $10-12 million per project. Let me tell you about feeling fragile." "Moose," I said, "that isn't the point." "Oh, right. But, Rox, according to After Ellen, she also said she felt like 'something of an impostor.' Don't you just hate that kind of public self-deprecation from powerful women?" "Please, Moose, if we edited all the self-deprecation out of your daily speech, the transcripts would be blank." "I think you're the one who's off-point now, Rox."

On the other hand, Foster also described herself as a "professional" and a "gentleman," a curious bit of gender-bending that Roxie's World's Special Task Force on Butch-Femme Secret Codes and Signals is struggling to decipher at this very moment. Most importantly, though, near the end of her remarks, Foster finally paid public tribute to Cydney Bernard, the woman widely reported to be her life partner. (Foster's two children are named Kit Bernard Foster and Charles Bernard Foster.) Prominent among those Foster thanked in her speech was

my beautiful Cydney who sticks with me through all the rotten and the bliss.

"I like that," Moose said. "Me, too," I replied. "Why do you like it?" "Well," she said, "you know -- that's what sharing daily life with someone is all about: a certain amount of rotten and a certain amount of bliss. You slug through it or soar through it day by day until the days turn into years and the years slowly add up, and if you're lucky or stubborn or foolish enough, someday you'll find yourself standing up in public and feel moved to thank your beautiful Cydney or Goose or Tammy or whomever just for hanging in there with you through every single bit of it." "And is that as good as coming out?" "Silly dog," Moose said, with a scratch behind my ears, "that is coming out, and you know it."

Welcome to daylight, Ms. Foster. We're glad to have you with us.
Posted by Roxie Smith Lindemann at 8:17 PM