Goose wanted my legions of loyal fans, all of whom have been such good little boys, girls, and genderqueers this year, to have this holiday treat from the real king of (rock 'n roll) kings, Mr. Bruce Springsteen:


Moose wanted you all to see this editorial from the latest Nation, which opts to endorse not a presidential candidate but the idea "of a broadly based small-d democratic movement, as only such a movement can create the space necessary to realize this moment's full potential." The editorial offers a fairly even-handed assessment of the three leading Democratic candidates and acknowledges that Obama has been less innovative in his policy proposals and more centrist in his positions than progressives mights have hoped. Roxie's World is certainly on board with the idea of using the occasion of the election to build broad public support for transforming the country and moving in a more progressive direction.

The Department of Shameless Self-Promotion encourages you all to click over to BuzzFeed to see who's leading the list of best links on the subject of Oprah campaigning for Obama. You guessed it, kids -- It's your very own favorite dog blogger in the provocatively titled "Once You Go Black." Remember to click on the link to my post from BuzzFeed to help keep us in first place!

Last but not least, the obsessive close readers in the Department of Eye Candy insisted that we toss up this extraordinary photo (from NYT) of Bill and (we presume) Hill out on the campaign trail: 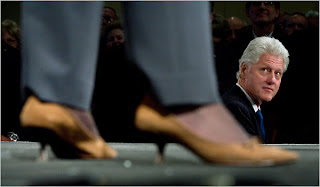 Ole Blue Eyes has just about mastered that adoring spousal gaze that is so essential to the role of First Lady, don't you think? If I didn't know better, I'd swear the guy was a puppy dog with those big beautiful eyes!

Happy Solstice, sweet children of the sun. On this day, Roxie's World remembers Moose's dad Frig, who loved the winter solstice because it meant that summer was on its way. He taught Moose that even on the coldest, darkest day of the year, you could close your eyes and feel the warmth of summer reaching toward you. Close your eyes, beloveds, and let yourself feel it now.
Posted by Roxie Smith Lindemann at 2:56 PM