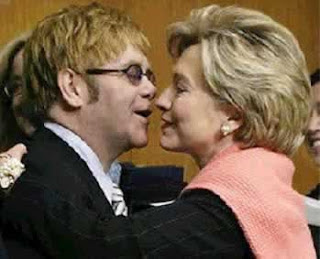 That post title ought to boost us up in the search engines, dontcha think, kids? Of course, it might also jeopardize our status as Unofficial Dog Blogger to the Hillary Clinton Campaign, but what the heck. Here in Roxie's World, we're fighting off the post-turkey, pre-Santa doldrums. Moose wanders the halls muttering about how fat she is. Goose keeps threatening to declare e-mail bankruptcy and delete her in-box. I wake up periodically to eat or get my hair done, but mostly I curl my creaky old bones into a ball and nap, figuring I'll just sleep through the whole cycle of Obama is surging / Hillary is stumbling news stories.

That cycle may have been broken by the bizarre hostage-taking incident that occurred yesterday at Senator Clinton's campaign office in Rochester, NH. The astonishing fact that something actually happened in the course of a presidential campaign woke the press from its holiday nap and gave the Clinton campaign a chance to show the candidate doing a full Rudy by shifting into crisis management and response mode. The golden girl took full advantage of the opportunity, as this MSNBC video shows:

Clinton: 'Relieved' no one got hurt

David Paul Kuhn in The Politico gives Clinton and her team a thumbs-up for their handling of the incident. As events were unfolding, the moms and I briefly imagined that Clinton would don a flak jacket and, with a gun-toting Jodie Foster at her side, storm the building and free the hostages herself, but having her look calmly presidential while expressing maternal concern for the young campaign workers was probably a better, though vastly less entertaining, way to respond to the situation. (Note to the political division of Roxie's World: Please add Jodie Foster to Clinton Fantasy Cabinet. She'll be the director of Homeland Security, which will have to be given some fancy, possibly French, name that sounds a good deal less creepy than "Homeland Security.")

Back to my provocative post title: Another bit of good news for the Clinton campaign came yesterday in the release of a Hunter College poll showing the senator has the support of 63% of lesbian, gay, and bisexual voters likely to vote in Democratic primaries. Pretty boys Barack Obama and John Edwards earned the support of just 22% and 7%, respectively, of those polled, which either means a disproportionate number of lesbians responded or -- and our money's on this explanation -- that gay men are trending in the same direction as the Candy Man and QTA, Roxie's World's co-chairs of the Pretty Boys for Hillary Caucus. The poll shows that 72% of LGB (no T's in the survey, alas) voters consider Senator Clinton a supporter of gay rights, "with Senator Obama at 52 percent and former Senator Edwards at 41 percent. On the Republican side, former New York City Mayor Rudy Giuliani was at 37 percent, followed by Senator John McCain at 13 percent."

“These findings suggest opportunities. Clinton benefits from a high turnout in this very Democratic bloc; her opponents would benefit from making their stated support for gay rights more visible to LGB voters,” said Murray Edelman, a distinguished scholar at Rutgers University’s Eagleton Institute and one of the study’s investigators.

Memo to the Clinton campaign: Don't waste one minute worrying about Oprah's decision to campaign for Obama. You've already got yourself a gay general. The photo at the top of this post suggests you're on friendly terms with Elton John. I can loan you a queer English prof or three for the duration of the campaign. I'm thinking that with a couple more appearances on Ellen, an Indigo Girls concert or two, and perhaps some timely references to relationship equality and Project Runway, you will sew up the gay vote and with it the nomination. Here's a tip, Hill: Queers may be the new Christians. The Hudson poll suggests that gay voters are more interested in politics and more likely to have contacted a government official in the last 12 months than the general population. After seven years of an administration willing to traffic in homophobia in order to swing elections, gay voters will be strongly motivated to vote for a change in direction. Present yourself, proudly and without apology, as the change gay voters want to see, and we will carry you right to the White House, where, I promise, you'll be met by a team of burly dykes ready to unpack your boxes and a team of pretty guys ready to pull off the grandest makeover this country has ever seen.