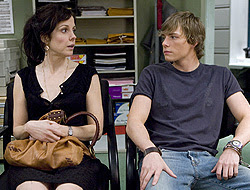 The war drags on and the details of Hillary Clinton’s new health care plan may still be fuzzy, but there is joy on the couch in Roxie’s World today for one simple reason:

The latest episode of Weeds does not suck.

This is great news for the moms, who were just about to give up on the Showtime series starring the adorable Mary-Louise Parker. Weeds has been a house favorite since its debut two seasons ago. In its first season, it garnered rave reviews from Roxie’s World’s Special Task Force on Representations of Marijuana in the Media (“Pot Shots” for short) for its nuanced yet hilarious treatment of a suburban widow, Nancy Botwin, who begins selling dope in the planned community of Agrestic when she realizes that her beloved late husband has left her and her two sons with a fabulous new kitchen and nothing to live on. Parker was brilliant and sexy as the resourceful, grieving mom helping the fine (mostly middle-aged male) citizens of Agrestic cope with the quiet desperations of their routinized, sanitized, hollow lives. The cast (including Kevin Nealon as the sweet but corrupt accountant and city councilman and Elizabeth Perkins as the Cruella de Vil-ish Celia) was superb and the writing pitch-perfect. Weeds was the smart satire Desperate Housewives dreamed of being in the best moments of its first season.

In its sophomore season, though, Weeds, as Mr. Bruce Springsteen might put it, took a wrong turn and it just kept goin’. The moms cringed when Nancy started dating Peter, who was revealed to be a DEA agent in the final episode of season one. Season two was wholly devoted to developing the Nancy-Peter relationship and the increasingly ridiculous web of plot twists and professional complications that ensued from it. That season ended with Peter’s apparent murder in a drug deal gone awry. The moms spent the entire hiatus wishing the next season would open with a Dallas-like shower scene in which Nancy would explain that Peter and his whole stupid subplot had been a bad dream. They longed for the show to get back to what it did best: devastatingly insightful suburban satire with three-dimensional characters who managed to be flawed, funny, and lovable. Forget the Armenian drug dealers, the shootouts, the crosses and double crosses. This isn’t Pulp Fiction, people. It’s a 30-minute slice-of-life comedy!

Unfortunately, the writers didn’t listen to my moms when they started doing scripts for the third season, which began airing in August. Over the first five episodes, things went from bad to nearly unwatchable as Nancy was forced into servitude for U-Turn, an overblown stereotype of the vicious black drug thug. Desperate to pay off a debt, the terms of which the aptly named U-Turn keeps changing, Nancy is subject to repeated humiliations and wholly gratuitous threats. None of it feels believable, not because the world of drugs isn’t a violent one but because the world of Agrestic, so compellingly drawn in the show’s first season, is shaped not by the violence of melodrama but by the soul-sapping violence of upper-middle class ennui. In places like Agrestic, guns don’t kill people. PTA debates over snack foods in vending machines kill people. Such a debate, in season one, was one of Nancy Botwin’s finest moments. The same cannot be said for “the brick dance” she is forced to perform in the course of running an errand for U-Turn in season three.

Finally, however, in the latest episode, “Grasshopper,” which aired last night, Weeds seems to be finding its way back to sanity. That return was signaled by the sudden (and wholly necessary) death of U-Turn, who died, as so many TV characters do, because the writers didn’t know what the heck else to do with him. Actually, U-Turn died because he had humiliated his hapless lieutenant, Marvin, one too many times. U-Turn, Nancy, and the hugely obese Marvin are out for a run in the hills when U-Turn, who has high blood pressure, collapses. Marvin, instantly realizing an opportunity, sends Nancy to get help and, in a moment reminiscent of Tony Soprano’s quick decision to help his nephew Christopher slough off this mortal coil, calmly holds his hand over U-Turn’s mouth until he dies. “This is for saying I was too stupid to be your second in command,” he says as he pushes his hand down tighter. “And this is for laughing at me for going to Dreamgirls.” Moments later, U-Turn deservedly breathes his last.

You know you are back in a sit-com when a man will kill to defend the dignity of having seen Dreamgirls. I know my good pal over at Queering the Apparatus would applaud that move and joins me and the moms in saying good riddance to U-Turn and all the dopey (not in a good way) plot twists he represented. The moms and I are well aware of the fact that the trunk load of heroin U-Turn left in Nancy’s garage could create a whole new series of equally ridiculous machinations, but his death also sets the stage for Nancy to have a rapprochement with Conrad and Heylia, her former partners who dumped her like a hot potato in the course of the battle with U-Turn. It’s true that Nancy has lost something of her innocence over the last season and a half, and it’s arguable that a drug dealer can’t afford to be as naïve as she was when she stumbled into the business. Still, one hopes the show has made something of a “U-turn” away from shoot-‘em-up melodrama and back toward the sly send-ups of suburban domesticity that served it so well in its early days. Weeds is too good a product to waste. We wish it a long, slow burn.

Peace out, righteous dudes.
Posted by Roxie Smith Lindemann at 7:22 AM