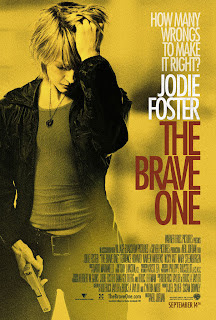 Moose insisted on the fancy foreign title for this post. She wanted to make sure that, should Jodie Foster happen to stumble into Roxie’s World, she’ll see that at least one viewer of The Brave One who does not have a degree in French lit from Yale caught all the heavy-handed references to Albert Camus’s absurdist novel The Stranger in Foster’s latest film. And by the way, Ms. Foster, the three English profs who headed off to the multiplex to subject themselves to your scenery-chewing performance in Neil Jordan’s powerful yet morally murky film also caught the allusions to D. H. Lawrence and Emily Dickinson dropped in like so many bonbons for literate viewers who were trying really hard not to focus on the bodies piling up as your character worked through her post-traumatic stress disorder. Moose cracked up as soon as you started purring into your microphone that, “The essential American soul is hard, isolate, stoic, and a killer.” “Ooh, ooh, I know,” she wanted to shout. “D. H. Lawrence, Studies in Classic American Literature!” By the time you recited “Because I could not stop for Death – ,” all three profs had entered into a spirited game of Guess the (Way Too Obvious) Quote, which did in fact help to distract them from the aforementioned corpses. (Final total: 8)

So, what did our crack team of highly trained interpreters think of The Brave One? After the flick, the team (Moose, Goose, and the Candy Man*) repaired to a local hot spot for mojitos and snacks. They agreed that the mojitos were delicious and the film was highly watchable, though Goose and the Candy Man both looked away during the scene of the brutal attack on Foster’s Erica Bain and her fiancé David (played by Naveen Andrews) that sets Erica’s odyssey of grief and vengeance into motion. For the record, Moose rarely looks away from a screen and never does so when Jodie Foster is on it. Director Jordan doesn’t flinch from depicting the gore that is the heart of his story. The attack on Erica and David is balletic yet visceral. The attackers tape it as it is happening, so viewers are forced to reckon with it simultaneously as a “real” event and a performance, effectively introducing several important themes related to media, technology, surveillance, and self-consciousness that are central to the film’s probings of identity and violence. Late in the film, viewers watch Erica watching the tape of the attack on her cell phone and then have to watch it again when she forwards the tape to the detective closing in on her and her killing spree. One of the many sicknesses the film explores is that of a postmodern culture gorged on images of itself. The Brave One may well be the first film for the YouTube generation.

The performances of Foster and co-star Terrence Howard, who plays the weary homicide detective named Sean Mercer, are indeed gripping. Their characters are in many ways reverse images of one another – white and black, female and male, killer and cop – yet they connect on the basis of shared woundedness and professional respect. Mercer has heard Erica on the radio before she and David are attacked. He knows the dulcet, NPR tones of her voice before he sees her battered, comatose body lying in a hospital bed. Erica meets Mercer at the scene of one of her first killings and quickly expresses an interest in interviewing him for her show. (Trolling for material helps to explain her presence on the scene.) The characters are soon locked in a fascinating pas de deux, drawn in by a desire to know one another despite the risks of exposure (for Erica) and moral compromise (for Mercer, as he slowly realizes Erica is the vigilante killer he is pursuing). The air between them is thick, the thickness an ambiguous mixture of the psychological and the erotic. The performances are brilliantly understated. Erica and Mercer speak few words, but their eyes convey worlds of pain and the unbearably complex understanding unfolding between them.

Had The Brave One stayed true to the moral and psychological complexity of its central relationship it might have been a brilliant film. Unfortunately, in the end, it absconds on that complexity; it betrays its characters and takes refuge in the cheapest forms of emotionalism: bloodlust and, we are sad to say, dog love. The ending justifies the judgment offered by A. O. Scott in the Times that the film is “cowardly” and “just as crude and ugly as you want it to be.” We won’t tell you exactly what happens, but we will tell you that Moose, Goose, and the Candy Man sat in stunned silence as the credits started to roll and a smattering of applause broke out in the theater. Jodie Foster, in promotional interviews for the film (like this one on NPR), has labored to suggest that the moral of The Brave One is that guns are always bad, but the ending valorizes Erica Bain’s vigilantism as cathartic, healing, and more efficient than the slow, bureaucratic work of law enforcement.

(For a round-up of reviews of The Brave One, go check out Rotten Tomatoes.)

*Postscript from the Office of Persona Management: The individual referred to in the above post as “the Candy Man” was formerly known in these precincts as “The Official Gay Stalker of Roxie’s World.” This change in identity has been carefully considered by OPM and approved by Roxie Smith Lindemann, Sole Owner and Proprietor of Roxie’s World, because it is a) easier to type than the lengthy “Official Gay Stalker of Roxie’s World” and b) more reflective of said individual’s fundamentally sweet disposition. All inquiries about identity adjustment should be addressed to me: Mark Twain, Director, Office of Persona Management, RW Enterprises, LLC.
Posted by Roxie Smith Lindemann at 12:37 AM