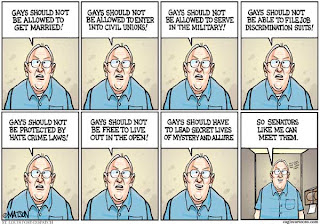 Roxie's World will shed no tears for the ignominious end of Senator Larry Craig's political career. (He announced today he will resign his office at the end of September, after Republicans abandoned him in droves when his June arrest in a men's restroom at the Minneapolis airport became public this week.) Good riddance, we say, to a hypocrite whose public actions aided and abetted the causes of homophobia and discrimination against LGBT people. As a senator, he helped to enact the ridiculous "don't ask, don't tell" policy, which continues to hound and persecute gays and lesbians who have served with honor in the armed forces of the United States. (William Saletan has an excellent piece in tomorrow's Wa Po which argues that by the standards of "don't ask, don't tell," Craig's conduct would have resulted in his discharge from the military. It's here.) He voted for the mean-spirited federal Defense of Marriage Act, supported a constitutional amendment defining marriage as between a man and a woman, voted against prohibiting job discrimination on the basis of sexual orientation, and voted against expanding hate crimes to include sexual orientation. (Check out his sorry record here.)

Bye-bye, Larry. Don't let the (bathroom) door hit you on the way out.

And yet, the sizable gay caucus here in Roxie's World got a little queasy this week when we paused to reflect on the nature of the crime to which Senator Craig pleaded guilty. He was not, after all, charged with having public sex or paying for sex or exposing himself or anything clearly, explicitly, actively sexual. Instead, Craig pleaded guilty to engaging in conduct (gestures that were interpreted as sexual signals) which he "knew or should have known tended to arouse alarm or resentment of others," according to his plea agreement. We have to admit that's a pretty low threshold. I mean, gosh, kids, if arousing alarm or resentment is a crime, I could come up with a pretty long list of folks I'd like to see in handcuffs, couldn't you? I'd start with the entire Bush administration and work my way down to all those celebrities who are rich and famous for no apparent reason and still manage to behave badly. I resent that, a lot, and think the amount of attention they get for such behavior is, yes, criminal.

We'll waste no sympathy on Craig, but it is worth pointing out that laws against "disorderly conduct" have historically been used to police a range of non-normative sexual behaviors that pose no threat to anything but an extremely narrow view of sexual propriety. Moose says you should all go read the work of historian George Chauncey to get a sense of how statutes against "lewdness," "vagrancy," and "loitering" have been selectively enforced to punish same-sex sexual conduct, or merely, as in Craig's case, the apparent desire to engage in same-sex sexual conduct. Political science professor Aaron Belkin briefly touches on the sordid history of such statutes in an op-ed on Craig in today's Wa Po.

There is more than a little irony in the fact that the Supreme Court de-criminalized sodomy in 2003 but it's still possible to be arrested for "wishing to engage in lewd conduct," as the officer who arrested Craig put it. If wishing is a crime, then your favorite dog blogger is guilty as can be. As, I imagine, are you, my beloved, desiring readers. Perhaps that's why they say, Be careful what you wish for.
Posted by Roxie Smith Lindemann at 2:31 PM