An Open Letter to Jodie Foster 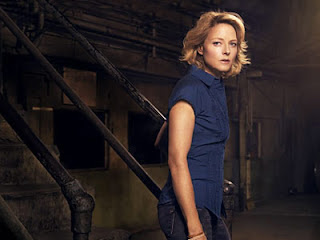 Congrats on the forthcoming flick, The Brave One. The moms and I have some ambivalence about the whole gun-toting vigilante aspect of the story, but you look great in the publicity photos, somehow managing to find that elusive mixture of fierceness and fabulousness that has served you so well throughout your career. (You also look stunning in the photos that accompany the Entertainment Weekly cover story/interview you just got.) Moose wants to talk to your trainer. She can't believe you've had two kids and are still so incredibly. . .fit. Goose, on the other hand, would like to talk to your agent. She's disappointed by some of your recent projects. Frankly, she has never gotten over Panic Room, which was laughably bad, despite the very fetching eyewear you sported. She totally gets the "Hollywood has no good parts for intelligent women in their forties" problem. She just hopes we don't have to suffer through twenty more years of seeing you play Smart Women in Ludicrous Situations before you start getting to play the Wise and Feisty Old Broad roles. We can't wait for you to become an American Vanessa Redgrave.

But that's not why I'm writing to you. We couldn't help but notice that you figured prominently in a recent Out magazine cover story by Michael Musto, "The Glass Closet: Why the Stars Won't Come Out and Play." The "glass closet," according to Musto, is "that complex but popular contraption that allows public figures to avoid the career repercussions of any personal disclosure while living their lives with a certain degree of integrity. Such a device enables the public to see right in while not allowing them to actually open the latch unless the celebrity eventually decides to do so herself." The flamingly gay Musto identifies you as one of the "foremost residents" of the glass closet and is untroubled by the coy way you have negotiated questions about your sexual identity that have arisen over the years. He describes you as,

one of the original out-but-not-really-out queens of “at least.” You know: She’s never come out publicly, but at least she’s never tried to claim she’s straight either. She’s talked incessantly about her kids, but at least she hasn’t named the father and tried to make it sound like he was any kind of love interest. She won her greatest acclaim for a movie protested by gay activists — The Silence of the Lambs — and reportedly refused to do a short film based on the lesbian classic Rubyfruit Jungle, but at least she isn’t afraid to play tough women, single moms, and parts originally written for men (even if that might be what she mostly gets offered).

Musto is right as far as he goes, though with the passage of time your association with the transphobic Silence of the Lambs becomes more rather than less difficult to comprehend, even if it was a great part and a riveting performance. (And it was. Moose still can't watch that scene of you in the house with Buffalo Bill in his night-vision goggles without wanting to leap into the screen to rescue you. She's a real sucker for that tough-yet-vulnerable thing you do. If she had a locker, it would probably be covered with pictures of you, but I digress.)

For years, the moms gave you a pass on the matter of coming out. After a deranged fan tried to assassinate a president to get your attention, they figured you were entitled to all the privacy you could manage as an incredibly public figure. They were also persuaded by a former teacher of theirs who argued that you were in some special category of sublimely talented Artists who somehow transcended politics. Yes, and this teacher was a big old dyke herself and a founder of women's studies. She had no problem knocking Shakespeare off the top of Mount Olympus, but the hem of your garment was not to be soiled by the vulgar politics of gender and identity. Shakespeare was a dead white guy, but you had serious work to do. If you want my opinion, I think it was that Yale degree in French lit that earned you the aura of untouchability among otherwise sensible people who had put themselves and their careers on the line in order to be visible and to transform disciplines and institutions. "She got a degree in deconstruction," another of the moms' awestruck colleagues used to say. To which I reply: Big whoop!

Here's the thing, Ms. Foster: I know the arguments for coming out all sound really quaint and old-hat at this point. I know you've got kids to raise and Work To Do. I admit there is integrity in trying to live life on your own terms and in refusing to put your guts on display
for a culture addicted to stories that have anything to do with celebrities and sex. Nonetheless, I would still like to see you offer a simple, matter-of-fact acknowledgment that you are, like my moms, a sister of Sappho. We're not saying you need to do a full-on Melissa Etheridge or offer yourself up as a poster girl for same-sex marriage. Just stand up and say, "I'm gay. It's no big deal, and it's nobody's business, but, yes, I am a proud, happy lesbian. Next question?"

Why? Because your studied evasion of the question suggests that your sexuality is a big deal. The open secret is still a secret, and secrecy suggests shame, fear, some scary old thing that dare not speak its name. Do you really think such an acknowledgment would have serious professional repercussions for you at this point? I mean, seriously, Ms. Foster, could it get much worse than Flight Plan? To be honest, I think the more significant threat to your career is your own diffidence, your refusal so far to venture beyond the safety of Hollywood studio films. I think you'd find better scripts and juicier roles if you looked elsewhere, but what do I know? I'm just a dog who watches a lot of HBO.

Coming out still matters. There are still queer kids who hunger for role models and straight kids who have never met an openly gay person in their lives. Moose had a coming-out moment in one of her classes just the other day. She's teaching a queer lit course this term, so it was a no-big-deal kind of thing, because it fit in with a conversation the class was having about labels, terms, the language we use for talking about sex and gender. She tucked it in slyly, as she so often does, in the form of a joke, but the students got the joke, and she could feel a collective sigh of relief spread across the room as they took it in. The relief was all about the difference between an open secret and real openness. You and Moose, with your degree in French lit and her PhD in English, might argue til Hell freezes over about what it is that gets revealed in such declarations of sexual identity. Given time and enough wine, the two of you might actually come to agree on the ontological aspects of the question, but Moose would still insist on the political and pedagogical value of coming out.

Why? Because when she made her declaration the other day, she looked back to the corner of the room and noticed a queer kid smiling. And it wasn't just because he got her joke.

P.S. Another nice piece on you in the Sunday Times, this one by Manohla Dargis. It occurs to me your penchant for "secrecy," which is also a theme in Dargis's prelude to The Brave One, is a cagey marketing ploy. Keep 'em guessing -- and keep 'em coming back to try to solve the riddle of the sphinx-link Foster. Whatever, girlfriend. I think they'd come back for the acting chops and the husky voice, no matter what you were selling, but that's just me.

P.P.S. On the other hand and just in case you think I've been harsh, check out this hard-hitting reaction to your reticence and your recent roles from Modern Fabulousity. He's promising to boycott The Brave One!
Posted by Roxie Smith Lindemann at 1:37 PM