Message to MoveOn: STFU!
Message to Dems: You're WINNING, You Idiots!

You know it's going to be a weird day when Moose shouts out from the breakfast nook, "George Will is right, by god!" Trust me, that rarely happens, no matter what Goose puts in the coffee. It happened this morning, though, as Moose ran tired eyes over these words:

Congressional Democrats should accept Petraeus's report as a reason to declare a victory, one that might make this fact somewhat palatable: Substantial numbers of U.S. forces will be in Iraq when the next president is inaugurated. The Democrats' "victory" -- a chimera but a useful one -- is that Petraeus indicates there soon can be a small reduction of U.S. forces.

Will goes on to argue that Dems can only claim victory by making a mountain out of a molehill, given the modest size of the troop reductions Gen. David Petraeus is advocating, and by making a spurious claim for having created the mountain. Will is wrong (as of course he must be, unless the world is flat and the law of gravity has been repealed) about the spuriousness of the claim. Democrats, who gained control of the Congress on the strength of strong anti-war sentiment throughout the country, can justifiably take credit for having created the conditions under which the Bush administration and its generals had to put troop reductions on the table. It doesn't matter how small they are. It doesn't matter that sizable numbers of U.S. troops are likely to be in Iraq when the next president takes office and perhaps well into her second term, though it would obviously be vastly better to bring as many troops as possible home as soon as possible.

What matters is that the ground and the discourse have shifted. Troop reductions will happen. If the administration can fudge the data enough to make its claims of progress appear credible (to the credulous), then the reductions may be larger and sooner than Petraeus was willing to suggest in his testimony before Congress. Otherwise, the administration will buy time until the disaster can be passed along to someone else -- and the blood of every single soldier and citizen who dies in this conflict in the meantime will be on Republican hands. Democrats will be on record as having been in opposition to the so-called "surge" and as having advocated timetables for withdrawal. In concrete terms, the victory may be modest, even hollow, but it is a victory nonetheless. Troop reductions of any size would not be a foregone conclusion if Democrats did not hold the gavels in the House, the Senate, and on all the Congressional committees.

You wouldn't know that from listening to the chatter among Democrats and progressives. Roxie's World is sorry to be giving a great big PAWS DOWN to our good friends from MoveOn.org, but their full-page ad in the New York Times in advance of Petraeus's testimony has to be one of the dumber political gestures we've seen in awhile. It fully justified Wa Po's Chris Cillizza's provocative debate topic: MoveOn.org: Momentum or Menace? The ad was a gift to Republicans, who wasted no opportunity to bring it up during the hearings to try to smear Democrats as troop-haters. That trumped-up reminder of the Vietnam era flummoxed Dems yesterday, though the Senate Foreign Relations Committee seems to have been less deferential in its treatment of the general and Ambassador Ryan Crocker today. (Wa Po coverage of today's testimony is here.)

You know we're idealists here in Roxie's World, kids. You know the Division for World Peace and Free (Legal, Organically Grown, Government-Regulated) Dope is one of the largest units of our vast corporate/political empire. Our official theme song is "Imagine." Our company uniform is flax pants, Birkenstocks, and whatever peace tee-shirt we can lay our hands on. It pains us to find ourselves advocating patience, pragmatism, and realism in trying to end a war we've been protesting since before it began. We hate it, but we don't see any alternative. If the left splits over the war, the right will win. If we allow the perfect to be the enemy of the best-we-can-get-under-the-circumstances, then President Romney will shred what's left of the Constitution with another Supreme Court appointment -- and people will go right on dying in Iraq. And Afghanistan. And, soon enough, Iran.

Six years past the nightmares that found us on a crisp September morning, we must all reflect on what we can do to end the horrors of war, of any death in violent conflict. We may never agree on a single answer, but we must bear that shared, noble purpose in mind and move forward with compassion and respect for differences. Otherwise, we lose, regardless of the outcome of any particular struggle. 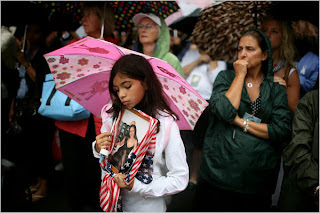 All I have is a voice
To undo the folded lie,
The romantic lie in the brain
Of the sensual man-in-the-street
And the lie of Authority
Whose buildings grope the sky:
There is no such thing as the State
And no one exists alone;
Hunger allows no choice
To the citizen or the police;
We must love one another or die.
--W. H. Auden, "September 1, 1939"