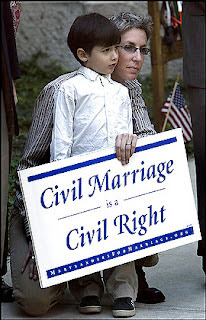 Message from MD to the Moms and Other Queers: Hey, there are seats in the back of the bus. What's the problem?

Message from the Moms and Other Queers to MD: What part of "equal justice under law" do you not understand?

Ironically, the moms are hard at work educating the young citizens of Maryland today, so my typist doesn't have time for a long post. (Clearly, there's a whole lot of educating to be done here in Maryland, wouldn't you agree?) Still, we had to register our profound disappointment with the long-awaited ruling by the Maryland Court of Appeals in Conaway v. Deane and Polyak, a case that challenged a 1973 law against same-sex marriage on the grounds that it violated the state constitution's ban on gender discrimination. In a 4-3 decision (actually, 4 1/2 to 2/12 because one judge concurred in part and dissented in part), the court ruled that

limiting marriage to a man and a woman does not discriminate against gay couples or deny them constitutional rights. Although the judges acknowledged that gay men and lesbians have been targets of discrimination, they said the prohibition on same-sex marriage promotes the state's interest in heterosexual marriage as a means of having and protecting children.

That's from Wa Po's report on the decision. For good, extensive coverage, including a link to the decision itself, go here.

Message to Children in Same-Sex Parent Families: Legally, you don't exist, and that's okay because the state has an interest in promoting other kinds of families that are better than yours. Got that? Britney Spears is a better mom than the two hard-working women who feed you and clothe you and read you to sleep every night. You are a second-class kid in a second-class family, and the state of Maryland is just fine with that.

Message to my Legions of Loyal Fans: Contact our good friends at Equality Maryland, the state's major LGBT civil rights organization. Thank them for their hard work on behalf of the community. Then write them a big fat check to keep the work going. Marriage may not be all we need or want, but it's a civil rights battle we can't afford to lose.

Your favorite dog blogger is covering her head with her paws this morning. I am ashamed of my home state and sad for all my queer pals. There are no second-class citizens in Roxie's World, beloveds. The fight will go on -- and I'm in it for Aaron and Maya and all the first-class kids out there whose parents happen to be queer.

Posted by Roxie Smith Lindemann at 10:34 AM