Ding dong the witch is dead, at least until he is resurrected on satellite radio. Now what do we do?

Moose stares at the photo of the Rutgers women's team I put up on my previous post. Again and again, her eye is drawn in by the five pairs of eyes that gaze into the camera. Dressed in their scarlet uniforms, they all turn their heads to the right to meet the lens, and somehow those sideways glances reveal their vulnerability as well as their determination. (Perhaps because the viewer realizes that the movement captured by the camera was probably elicited by one or several photographers shouting, "Over here, ladies. Could you look here, please?" They are no more free in this moment than Princess Diana ever was before the camera.) Their looks are proud, quizzical, unwavering, but young. It's a tight, well-composed shot. The uniforms and the similar positioning of their bodies imbue it with certain elements of symmetry, but the players' heads are all at slightly different heights and angles. This adds a pleasing asymmetry to the composition and reminds us that the players are individuals as well as teammates. Each has her own look, her own way of negotiating this moment of exposure, her own story.

Did Don Imus lose his job because of a photograph? Because of a press conference in which a group of poised young women took the microphones in their hands to speak of their wounded dignity and to call the grown-ups in their world to task for turning a blind eye (and a deaf ear) to the poisonous stew of casual hatreds our popular culture has become? Gorged as we are on our 24/7 buffet of images, how does one photograph break through the clutter and hold our attention, much less make a difference in the world? In the incessant yakking and yammering of the 21st century, how do a handful of athletes who clearly haven't gone to broadcasting school get us to stop dead in our tracks to listen? At the same time, before we get too caught up in congratulating ourselves for getting rid of Imus, shouldn't we pause to consider how much difference one man's early retirement will make if the market for the garbage he was selling remains and a million other tox jocks (a term made up right here in Roxie's World) are still on the air? Getting rid of Imus has little or nothing to do with getting rid of racism, sexism, classism, homophobia, and colorism. All of the social and economic structures supporting those hatreds are still securely in place.

Moose doesn't usually sound like the Tipper Gore of the early 80s wagging her finger and railing against the filth of popular culture. She's also not usually one to rain on the parade of even a modest victory in the battle against meanness. Perhaps the awful weather of Washington's reluctant spring has got her down. It's pouring down rain here and has been since late yesterday. The moms have had a quiet weekend, which has given Moose time to sit in the basement and think about photographs, press conferences, and events that get taken up in the complex machineries of public life and become occasions either for collective reflection and social change or an opportunity merely to pick at the scabs of the nation's oldest, deepest wounds. It's too soon to say which the Imus ordeal will turn out to be, but Moose has found herself returning to the work of another English prof, Lauren Berlant, who published a brilliant book in 1997 called The Queen of America Goes to Washington City: Essays on Sex and Citizenship. Moose is particularly fond of the chapter devoted to what Berlant calls Diva Citizenship, a concept that helps to explain why the Rutgers press conference was so riveting yet also suggests that the moment's long-term political consequences may be limited. Much of Berlant's analysis focuses on an equally riveting spectacle, Anita Hill's 1991 testimony before the Senate judiciary committee's hearings on the confirmation of Clarence Thomas. In setting up her analysis, Berlant writes:

The spectacle of Anita Hill testifying before the Senate and the American people manifested to me the importance of grasping the unlikely rhetoric of these moments. A member of a stigmatized population testifies reluctantly to a hostile public the muted and anxious history of her imperiled citizenship. Her witnessing turns into a scene of teaching and heroic pedagogy, in which the subordinated person feels compelled to recognize the privileged ones, to believe in their capacity to learn and to change; to trust their desire to not be inhuman; and trust their innocence of the degree to which their obliviousness has supported a system of political subjugation. These moments are acts of strange intimacy between subaltern peoples and those who have benefited by their subordination. These acts of risky dramatic persuasion are based on a belief that the privileged persons of national culture will respond to the sublimity of reason.

I call these moments acts of Diva Citizenship. Diva Citizenship does not change the world. It is a moment of emergence that marks unrealized potentials for subaltern political activity. Diva Citizenship occurs where a person stages a dramatic coup in a public sphere in which she does not have privilege. Flashing up and startling the public, she puts the dominant story into suspended animation; as though recording an estranging voice-over to a film we have all already seen, she renarrates the dominant history as one that the abjected people have once lived sotto voce, but no more; and she challenges her audience to identify with the enormity of the suffering she has narrated and the courage she has had to produce, calling on people to change the social and institutional practices of citizenship to which they currently consent (222-3). 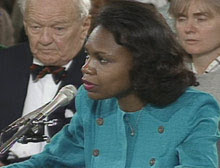 The structural echoes between the two events -- Hill's testimony and the Rutgers press conference -- are as striking as the visual resemblances between these two photographs of Hill on the Hill and Essence Carson at the podium this past Tuesday. Such compelling resemblances justify the application of Berlant's model to the current situation. Like Hill before her, Carson presents herself as a reluctant entrant into the public sphere, speaking on behalf of teammates "driven to a point of mental and physical exhaustion" by the media's 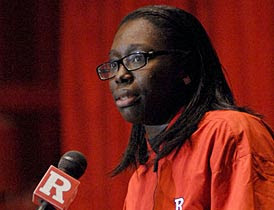 invasion of their privacy and to express the "great hurt, anger, and disgust" they experienced as a result of Imus's comments. Her and her teammates' suffering has put them on the national stage, and so she tells the tale of their suffering, their imperiled citizenship -- at the same time pointing out that the spotlight's glare was much less bright when they were playing for a national championship: "Where were these major networks when the youth were making history for a prestigious university?" she asks. More than the measured Hill, however, Carson sees herself as part of a larger team fighting for a cause beyond her own dignity. "We realize that it's about women across the world, across this nation," she notes, and declares that she and her teammates are determined to take a stand. "We're attacking something -- an issue we know isn't right." (For a transcript of Carson's statement at the press conference, click here.)

Time will tell whether the latest episode of Diva Citizenship will lead to deep or lasting political change. Nonetheless, we give the mighty women of Rutgers Five Paws Up and a tail-wagging Roxie's World Seal of Approval for making a lot of people stop, look, listen, and think about words, meanings, intentions, and consequences. We'll put our paws in the air for free speech, too, but remember, kids: Just because you can say it doesn't mean you should say it.

And now, class, Roxie's World offers you a not quite random list of links on Ho-gate:

Peace out, loyal fans! This may be our longest post yet. Time for this old dog to hit the couch.
Posted by Roxie Smith Lindemann at 5:45 PM